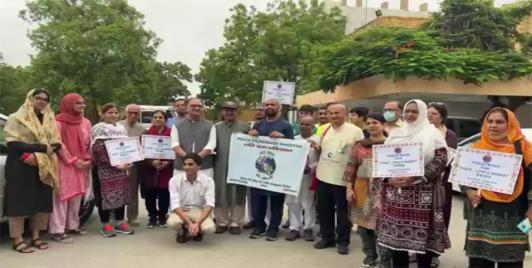 On their 75th independence anniversary, peace pilgrims from India bring message of love to Pakistan

This is part of a long tradition of celebrating the two countries’ independence days together, started by activists like the late Dr Mubashir Hasan, Nirmala Deshpande, Asma Jahangir, Kuldip Nayar, and others.  Peace groups on either side have been doing this for a couple of decades now, even as administrations in both countries try to prevent them

Indian cultural diplomacy - and creation of a South Asian identity

Over the years, women officers in the Indian armed forces have begun notching various types of achievements

Welfare spending is not freebie culture

Uncontrolled proliferation of the existing combat uniform has led to many cases of breach of security of military establishments and personnel and, while it has been a cause of concern, not enough action has been initiated

Save the children: Millions of children victims of acute malnutrition, hunger and diseases in Afghanistan; girls shut out of education

The country is already one of the worst places in the world to be a child, And, in the past year, the situation has become grimmer because of crippling poverty, violence, and drought, according to UNICEF.

His remarks came days after some media reports indicated that the Pakistan Army could try to facilitate a dialogue or deal between Khan and the ruling coalition to create a consensus on early elections, which remains Khan's primary demand, writes Shraddha Nand Bhatnagar for South Asia Monitor

Pakistan’s ruling coalition dealt yet another blow, its legitimacy in crisis

The decision to oust Imran Khan ultimately allowed him to hijack the anti-establishment tag in his favour. Khan’s repeated reference to the government as the “imported government” and to the military as “neutrals” further reinforced his perception as a popular civilian leader

In that sense, her choice by the dispensation of Prime Minister Narendra Modi, otherwise seen as an autocratic leader who has been accused of undermining many of India's democratic institutions, is seen as nothing sort of revolutionary, both by the standard of the country's conservative political and social norms

Why is India resilient to oil volatility despite overdependence on imports?

In India over 75 per cent of electricity is generated from coal-based thermal plants. Oil accounts for less than 2 percent of electric power, writes S. Majumder for South Asia Monitor

South Asia does not value its manhours: Change working hours

The simplest solution will be to change working hours by advancing it to 0700 hours and ending the workday at 1530 hours, so that the entire working hours are during daylight hours, writes Amb Sarvajit Chakravarti (retd) for South Asia Monitor

Under no circumstances would New Delhi like to see a break in the recent momentum in bilateral relations generated through increased economic and developmental cooperation, even if there is a change of the government in Kathmandu later this year, writes Shraddha Nand Bhatnagar for South Asia Monitor

Pakistan gets breathing space with IMF deal, but will it bite the bullet of structural reforms?

For Pakistan's political elites, it has become a cycle of securing loans from allies to fund its ever-ballooning deficit and again approaching the IMF when funds dry up, writes Shraddha Nand Bhatnagar for South Asia Monitor

The I2U2 will work in six areas – water, energy, transport, space, health, and food security – combining the expertise and the resources of the four nations, Modi said

A short video, which went viral on social media, showed people searching for leftover food in the kitchen.
Perspective

The bodies recovered by the residents showed evidence of torture and brutal executions, including some with missing limbs and ropes around their necks. Others had their head beheaded or slit throats, according to the report

Nepal, which shares a long open border with India to its north, west and east, enjoys cultural, historical, and civilizational bonds with India for centuries. People across the border in both countries have been inter-marrying for ages, which led to the “Roti and Beti ka Rishta” (cultural and marital bond) tag to the relationship between the two neighbours.

Other countries in the region, such as Sri Lanka, Pakistan, and Nepal, are also struggling to arrest the depletion of their foreign exchange reserves as a result of high fuel prices. However, Bangladesh is still better placed and has enough time to work out a deal with the IMF.