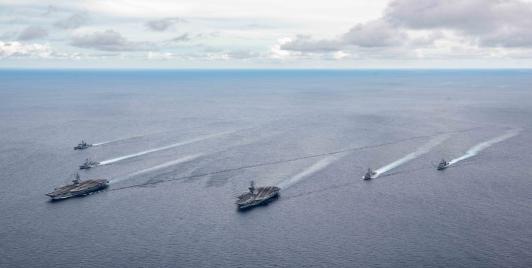 With the declining impact of deterrence measures, including dwindling effectiveness of confidence-building measures and a wide array of dialogue-building processes in trying to mitigate risks of conflicts, the question of a full-blown conflict stemming from the inevitability of Thucydides’ trapping would be a matter of when and where.

When the Security Council’s Counter-Terrorism Committee (CTC) met in Mumbai last month, an audio clip of Sajid Mir directing the 26/11 terrorists at the Chabad House Jewish cultural centre was played to focus on the role of the terrorist under Beijing protection at the UN.

Biden-Xi meeting: A modus vivendi and a reality check for Beijing?

The rise of nationalist sentiments globally and in Europe, as seen in the premiership of Giorgia Meloni in Italy and Rishi Sunak in Britain, are conflating political circumstances for a global pushback against China’s actions where these countries are ready to call out China in a more forthright manner.

Xi's tightening grip has wide ramifications for China and the world

A forceful "unification" of Taiwan has been projected by most analysts as happening within the next five years of Xi’s new third term, as he will need this to cement a history-making legacy that will help him extend his rule for life

Is Bangladesh looking for a Chinese solution to its Teesta water woes?

Bangladesh negotiated with India for 35 years, but the negotiations did not make any headway due to the river's importance to West Bengal. So Bangladesh has to look for other solutions where advanced Chinese technologies and experiences may have something to offer.

‘Ikigai’: Togetherness is the hallmark of expanding India-Japan relations

This partnership is also mutually driven by concerns over China’s territorial and naval expansion in its neighbourhood. As India prepares for the Malabar exercise being hosted by Japan this year, the focus should be on providing a stable, secure and prosperous Indo-Pacific.

Taipei needs full regional support for its survival and in its efforts to repel a Chinese invasion;  it cannot afford to be distracted by other lingering issues with other neighbours, including Japan, which Beijing is happy to exploit to its advantage.

Fourteen countries, including India, in multinational exercise in Indo-Pacific: US calls it 'integrated deterrence' against China and Russia

"The National Defense Strategy is really premised on this urgent need to sustain and strengthen deterrence with the focus on the People's Republic of China," the US official said.

Myanmar's military junta is facing fierce resistance from various ethnic minorities. A shadow government, called National Unity Government (NUG), was formed to counter the military government. The shadow government has already appealed to the international community for support, to which the United States, the European Union and ASEAN member states have responded.

Experts have even called for Japan to deepen bilateral security cooperation with India, Britain and France, countries that have shown a new resoluteness towards Chinese actions in the Indo-Pacific.

Japanese supply chain resilience to decouple from China: Is India the new bet for Japanese investors?

The launching of supply chain resilience in the Indo-Pacific region is another attribute of the rising interest in India. India’s strong leadership in the region evokes new opportunities to reap benefits from its low-cost hub, laden with high IT technology.

Colonna tweeted in French that it was the “launch of a new trilateral format in the #Indo-Pacific zone with India and the Emirates“ with “a common ambition to move forward in 4 areas: #security and #defence, #Climate, #Technologies and people(-to-people) exchanges”.

Professor Thussu says, ”Although New Delhi remains a traditional friend of Dhaka, the growing presence of China in Bangladesh and elsewhere in South Asia, makes it difficult for Hasina to prioritize India over China: the scale and depth of Chinese investment, aid etc. can’t be matched by India.”

Is China's tightening grip over Malaysia and region a threat to Western security order?

In this regard, both ASEAN and Malaysia seem to have lost their appeal to the West for a deeper security foothold, with Washington realising that the current situation of the region's pandering to Beijing makes it difficult for the US to establish rooted military alliances and placement of strategic anti-missile capacities, among others

Not surprisingly, India has not come out with any condemnation of China for its atrocities in Xinjiang, a classic example of India in recent times trying to steer clear of global contestations

A strategic shift? Lessons for India from the Dragon's Taiwan fury

It will be for the first time that the Pentagon is getting involved in a high-altitude exercise with Indian troops, a fact that will not go unnoticed in Beijing. Is staging these combat drills so close to the disputed region indicative of a strategic shift on the part of New Delhi?

A new, long and potentially ugly physical and mind games have begun, where conventional and tactical firepower alone would not guarantee long term success and acceptance

With no diplomatic ties with Bhutan, prevailing border tensions with India and a changing geo-strategic sphere in Nepal, China's Himalayan neighbourhood security is critically tied to safeguarding Tibet