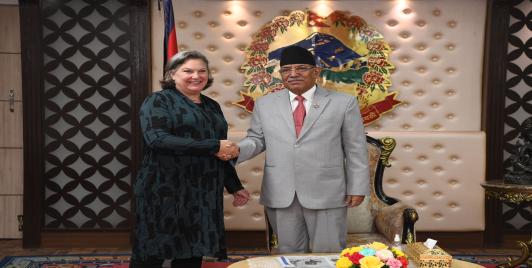 Like other nonaligned states in South Asia, Nepal seeks strategic space to pursue relations with China, India, and the United States on its own terms. That’s harder to do as countries fall over one another to court Kathmandu.

Strengthening military cooperation has the potential to provide strategic benefits for both of them. Due to their geostrategic importance, Bangladesh and Myanmar have become a hotspot in the western front’s Indo-Pacific Strategy (IPS) and China's Belt and Road Initiative (BRI).

Separately at a meeting of the India-US initiative on Critical and Emerging Technology (iCET) led by Doval and US National Security Adviser Jake Sullivan, the US committed to expeditiously review a GE proposal to jointly produce jet engines to power jet aircraft manufactured indigenously by India, according to the White House

Indonesia sees Malaysia and Australia as key players, including Vietnam and the Philippines, in forming a stronger common cooperative platform in facing the challenges of China in the Indo-Pacific.

Bangabandhu Tunnel: A game-changing connectivity infrastructure coming up in Bangladesh with Chinese help

The tunnel will link the Asian Highway network. Through this route, goods can be moved directly across the border between India, Bangladesh, and Myanmar.

China’s English language publication Global Times had said these "observers" - euphemism for party apparatchiks - had warned New Delhi of “new barriers” in talks related to de-escalation if India were to go ahead with the transportation of its most advanced missile to the western side of the LAC. It was also reported that China was quite riled about widening of roads on the Indian side of the LAC for the purpose of transporting heavy equipment, including BrahMos missiles.

The implementation of this project in Eastern Ladakh and other sectors along the LAC is going to predictably rile the Chinese.

Can Malaysian policymakers get their country out of China’s expanding orbit?

Domino effects seen in various countries at the receiving end of Beijing's political bearhug and economic penetration, from port takeovers to media influence, should warrant alarm bells in Kuala Lumpur. Policymakers here are in full awareness of this dilemma, but it takes more than political will to reimagine a new direction in Malaysia’s thinking and policy orientation.

India’s narrative against China must be reviewed and reframed and the appropriate use of India’s military capability must get accepted by the political leadership.

With the declining impact of deterrence measures, including dwindling effectiveness of confidence-building measures and a wide array of dialogue-building processes in trying to mitigate risks of conflicts, the question of a full-blown conflict stemming from the inevitability of Thucydides’ trapping would be a matter of when and where.

When the Security Council’s Counter-Terrorism Committee (CTC) met in Mumbai last month, an audio clip of Sajid Mir directing the 26/11 terrorists at the Chabad House Jewish cultural centre was played to focus on the role of the terrorist under Beijing protection at the UN.

Biden-Xi meeting: A modus vivendi and a reality check for Beijing?

The rise of nationalist sentiments globally and in Europe, as seen in the premiership of Giorgia Meloni in Italy and Rishi Sunak in Britain, are conflating political circumstances for a global pushback against China’s actions where these countries are ready to call out China in a more forthright manner.

Xi's tightening grip has wide ramifications for China and the world

A forceful "unification" of Taiwan has been projected by most analysts as happening within the next five years of Xi’s new third term, as he will need this to cement a history-making legacy that will help him extend his rule for life

Is Bangladesh looking for a Chinese solution to its Teesta water woes?

Bangladesh negotiated with India for 35 years, but the negotiations did not make any headway due to the river's importance to West Bengal. So Bangladesh has to look for other solutions where advanced Chinese technologies and experiences may have something to offer.

‘Ikigai’: Togetherness is the hallmark of expanding India-Japan relations

This partnership is also mutually driven by concerns over China’s territorial and naval expansion in its neighbourhood. As India prepares for the Malabar exercise being hosted by Japan this year, the focus should be on providing a stable, secure and prosperous Indo-Pacific.

Taipei needs full regional support for its survival and in its efforts to repel a Chinese invasion;  it cannot afford to be distracted by other lingering issues with other neighbours, including Japan, which Beijing is happy to exploit to its advantage.

Fourteen countries, including India, in multinational exercise in Indo-Pacific: US calls it 'integrated deterrence' against China and Russia

"The National Defense Strategy is really premised on this urgent need to sustain and strengthen deterrence with the focus on the People's Republic of China," the US official said.

Myanmar's military junta is facing fierce resistance from various ethnic minorities. A shadow government, called National Unity Government (NUG), was formed to counter the military government. The shadow government has already appealed to the international community for support, to which the United States, the European Union and ASEAN member states have responded.

Experts have even called for Japan to deepen bilateral security cooperation with India, Britain and France, countries that have shown a new resoluteness towards Chinese actions in the Indo-Pacific.