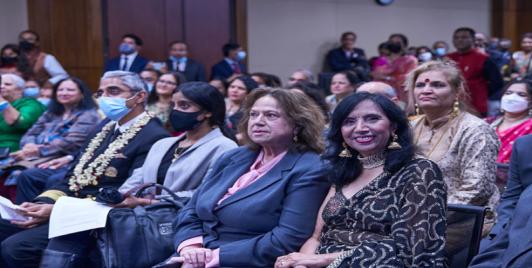 Indiaspora, a nonprofit organization of global Indian diaspora leaders, hosted a Diwali celebration with several community partners in the US Capitol Rayburn House Office Building in Washington DC to honor Indian Americans who have been elected, appointed, and nominated to public office, as well as staffers on Capitol Hill, for their contributions to government service

Dramatic rise in heart diseases among South Asians in US: AAPI seeks to create awareness
More on SOUTH ASIA ABROAD

An Indian man has been deported from Australia after he served a jail sentence on charges of attacking Sikhs, the country's immigration and citizenship minister tweeted

India is a crucial global leader in the fight against COVID-19: US Deputy Secretary of State

The Washington-based International Monetary Fund has commended Indian authorities' “swift and substantial” response to the COVID-19 pandemic and noted that there is the possibility of “a faster than expected recovery."

India wants every Indian citizen abroad to have a right to vote in Indian elections, but the implementation of this decision is fraught with many practical challenges,  India's Minister of State for External Affairs V Muraleedharan said at an  Interactive session with non-resident Indians and the Indian American diaspora at the Hampton Hotel and Suites in Stamford, Connecticut

A small plane owned by a prominent Indian-origin cardiologist has crashed in the US state of California, killing two persons, including the physician, and causing a major fire that engulfed nearby homes and left a swath of destruction, according to local media reports

Bangladeshi American Delowar Mohammed Hossain, who was stopped by US law enforcement as he was about to fly out to join the Taliban, has been convicted on charges of trying to help the terrorist organisation that now controls Afghanistan

A 43-year old Sri Lankan American, whose family fled the civil war in Sri Lanka when she was just four and who lived undocumented for over a decade in Los Angeles, is set to step down at the end of her tenure yearend as the first woman of color and immigrant to become New York City's Commissioner for International Affairs

Indians who are fully vaccinated with Covishield or any other UK-approved vaccine will not be quarantined when they arrive in Britain from October 11, the High Commissioner to India, ending a row over what was perceived as unfair imposition of COVId-19 quarantine rules

India's Education Minister Dharmendra Pradhan on Tuesday held a virtual meeting with Australian counterpart Alan Tudge and discussed the issue of 17,000 Indian students who want to return to Australia for education

Desperate to break the ice with US President Joe Biden who has not interacted even once with Pakistan Prime Minister Imran Khan despite being in office since January, Islamabad is now using the “good offices” of an influential Pakistani American to arrange a telephone call between the two leaders

India’s Chief of Defense Staff, General Bipin Rawat, in what is being termed as a “historic meeting” with US Defence Secretary Lloyd Austin, discussed expanding multilateral cooperation with regional partners, according to Defence Department Spokesperson John Kirby

America is better off because of crucial friendship with India; Indian Americans embody the American dream: US Senate Majority Leader