Equitable vaccine distribution a must for South Asia's economic recovery

The Asian Development Bank has stated that in South Asia the new wave of Covid-19  between March and June 2021 has somewhat dampened the economic outlook of the region, writes Partha Pratim Mitra, for South Asia Monitor

The World Bank in its assessment  has  stated that  the world economy is on its way to expanding at the rate of 5.6 percent in 2021 — which is so far the most robust that has taken place in 80 years.

However, according to the Bank, the global recovery is expected to be uneven. Such unevenness is reflective of the sharp bouts of economic recovery in some advanced countries led by the US, owing to substantial fiscal stimuli in the midst of highly unequal vaccine access in many parts of the world. For instance, such unevenness in vaccine access has not aided the economic revival process in many middle and low-income countries.

In many emerging markets and developing economies (EMDEs), high Covid-19 caseloads, obstacles to the progress of vaccination, and a partial withdrawal of macroeconomic support are slowing down some of the benefits of strengthening external demand and rising commodity prices.

By 2022, global output is likely to remain about 2 percent below pre-pandemic projections, and there are apprehensions that per capita income losses incurred last year will not be fully met in about two-thirds of EMDEs. The global outlook, however, remains subject to significant non-occurrence of events and contingencies, which include the possibility of large Covid-19 waves due to new variants of the virus, higher levels of financial stress and growing EMDE debt levels.[i]

Where does South Asia figure in the global recovery process given the uneven size of countries in the region and the complex regional inter and intra-country problems including fragility that it has acquired due to internal conflicts that have of late assumed global dimensions?

One of the countries of the region – Afghanistan - figures in the list of fragile and conflict-affected low-income countries (LICs) which have been hit the hardest by the pandemic, with GDP falling by an estimated 1.2 percent in 2020. In per capita terms, output in Afghanistan contracted by an estimated 3.8 percent last year, reversing per capita income gains by at least a decade.

In some countries, the negative effects of the pandemic have got aggravated by severe floods, droughts, locust infestations, and rising insecurity (Afghanistan, Eritrea, Mali, Sudan).[ii]

South Asia happens to be part of the EMDEs. We shall first see how the EMDEs figure in the global economic recovery process and thereafter separately examine the South Asian region in the perspective of the growth dynamics that drive the region.

The trends (See table one) show that as more information became available, the forecast has also changed which points towards the slowing down of the recovery process between 2021 and 2023. The tardiness is more gradual for the EMDEs as compared to the advanced economies.

Commodity importers among the EMDEs in which most countries of the South Asia region will be analyzed taking into consideration the growth dynamics of the region, (see table two ) 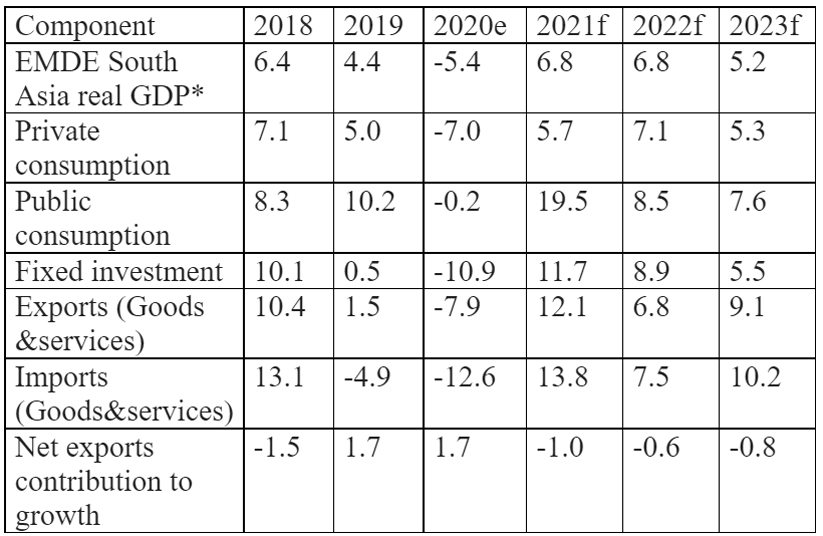 *Excludes Afghanistan, Maldives and Bhutan due to data limitations that prevent forecasting.

The South Asian region between 2021 and 2023 is expected to show a more robust recovery process as compared to the global economy and advanced economies despite showing a much sharper slide in the growth rate of real GDP in 2020 (see tables one and two).

The focus of growth in the South Asian region would therefore have to be the internal economy and therein lies the challenge. With all three engines of growth - private and public consumption  and fixed investment - showing a declining trend between 2021 and 2023 (see table two), the challenge becomes all the more daunting.

The Asian Development Bank has stated that in South Asia the new wave of Covid-19  between March and June 2021 has somewhat dampened the economic outlook of the region. The adverse economic impact of the new wave is, however, according to the ADB, expected to be limited, with businesses and consumers able to adapt to the pandemic and containment measure better now than they were able to do so a  year ago.

The inflation forecast for South Asia in 2021 has also been  raised from 5.5 percent to 5.8 percent, based on higher inflationary expectations in the region.[iii]

Projections by the World Bank and the ADB point towards the revival of the major advanced economies of the world as also the South Asian region. The caveat of both the international financial institutions has one common underlying theme, which is the ability of nations to control the spread of the virus, since a lot depends on the effectiveness of such a control, particularly the new variants of the virus.

If the virus is better controlled, economies would open up and the growth momentum would pick up through revival of public and private investment and removal of the demand constraint in the form of reduced private consumption through the creation of jobs and livelihood opportunities.

The implicit assumption of such a policy would be that control of the virus and revival of the economy would go hand in hand, with steps for economic revival getting more priority after the Covid cases reduce.

However, equitable vaccine distribution has to be ensured, as otherwise, cases could mount and regions would not get the much-needed opportunity to create conditions germane to a revival of growth. This is more so in the South Asian region, which is also seeing new uncertainties in the form of internal strife and change of regimes over and above the prospects of a renewed spread of the pandemic.

(The writer is a retired Indian Economic Service officer who worked in the labor ministry. The views expressed are personal. He can be contacted at ppmitra56@gmail.com)