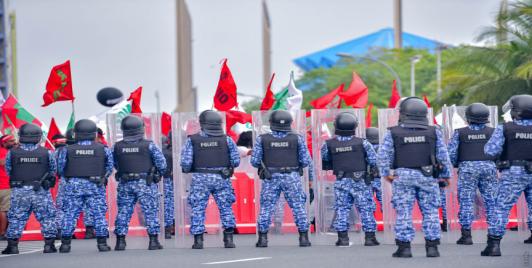 The decree came after the country’s National Security Council concluded that the ‘India Out’ campaign, led by former president Abdullah Yameen, posed a threat to national security, to Maldivians living in India, and Indians living in the archipelago

Tourist inflow crosses half a million in the Maldives, records 46 percent growth in four months

Sign language will be used in all the sessions from Monday, 18 April onwards, as well as any significant interviews as well, said Hassan Ziyaau, the Communications Director for Parliament.

The agreement with the US is among many initiatives Male has been taking to diversify its defense and security ties, with the US expanding its ties with the Indian Ocean archipelago and opening an embassy in Male as a recognition of its strategic location in the intersection of important sea lanes

The Indian Ocean Region (IOR) should remain a demilitarized zone, former Maldivian President Abdullah Yameen said, opposing the alleged presence of Indian military personnel in the strategically located archipelago, which has lately emerged as a key battleground for influence between the two big Asian powers, India and China

Russian superrich move superyachts to the Maldives amid western sanctions

Amid growing western sanctions on Russia, at least five superyachts owned by Russian billionaires are either anchored in or moving around the Maldives, a small Indian Ocean archipelago and a luxury tourism destination, media reports say citing ship tracking data

The Maldives to extend visas of stranded Ukrainian tourists; worried about war effect on tourist flow

On Thursday, the defence minister reiterated that the campaign posed a threat to Maldivian nationals living in India and foreigners staying in the archipelago

Britain has established its high commission in the Maldives’ capital Male, becoming the first European country to open a diplomatic mission in the country for its luxury tourism and white sandy beaches

Indian military personnel, even if stationed in the Maldives, pose “no threat to civilians’ security”, the archipelago’s top police official said, as opposition parties intensify protests under the banner of the “India Out” campaign. The government this week plans to table a bill seeking to criminalize the campaign which, authorities say, is now threatening Indians working in the country’s service sector

The Maldives government is considering bringing in a law that will, indirectly, criminalize the ongoing “India-Out” campaign spearheaded by former president Abdullah Yameen

We will live with the virus, says Maldives, as another Covid-19 wave threatens economic recovery

We are now focussing on living with the virus, the Maldives government said on Monday, as the archipelago recorded over 2400 Covid-19 cases, the highest since the pandemic began in March 2020