Indian and United States armies have held a joint exercise in the snow-bound Chugach Mountains in Alaska, approximating the conditions Indian soldiers face in the Himalayas where they confront Chinese troops, though no one is saying it that way explicitly

Indian and United States armies have held a joint exercise in the snow-bound Chugach Mountains in Alaska, approximating the conditions Indian soldiers face in the Himalayas where they confront Chinese troops, though no one is saying it that way explicitly. During the two weeks of Yudh Abhyas joint military exercises that ended on Friday, the soldiers practised cold weather survival, medical evacuation by air, mountaineering and small-arms marksmanship, according to the US Army.

The final part of Yudh Abhyas was the field training exercise thousands of metres above sea level in “the Chugach Mountains in deep snow, blowing winds, and sub-freezing temperatures” where combined Indian and US Army units carried out a simulated military operation assault, a US Army writeup said. The highest point in the Chugach Mountains is about 4,000 metres.

Indian soldiers have faced Chinese aggression in the snow-bound Ladakh along the Line of Actual Control leading to clashes with casualties on both sides. There was also a standoff in January this year in the Sikkim area.

About 350 Indian soldiers from the 7th Battalion of the Madras Regiment, known as Shandaar Saath, and 400 US paratroopers from the 4th Infantry Brigade Combat Team (Airborne) of the 25th Infantry Division called the Spartan Brigade took part in the 17th edition of Yudh Abhyas.

The exercises were “aimed at improving the combined interoperability of the Indian and US Army to increase partner capacity for conventional, complex, and future contingencies throughout the Indo-Pacific region,” according to the US Army article.

The troops from the two countries worked on evacuating casualties using UH-60 Blackhawk helicopters and practiced sling loading artillery underneath CH-47 Chinook helicopters. They also took turns familiarising themselves with each other’s weapon systems including the American M4 carbine, M240B, and the Indian Small Arms System.

CH-47s and UH-60 helicopters are also in the Indian military's arsenal.

“This exercise has achieved a high degree of interoperability and jointmanship at all levels,” Indian Brigadier Parag Nangare, who was the exercise director. He added, “We have learned the best practices, techniques, and procedures which have evolved from operating in these conditions.”

“Two weeks ago, we met as strangers” but now “we share a bond of friendship and the knowledge that when needed, we will be there for each other,” said US Army Colonel Jody Shouse. 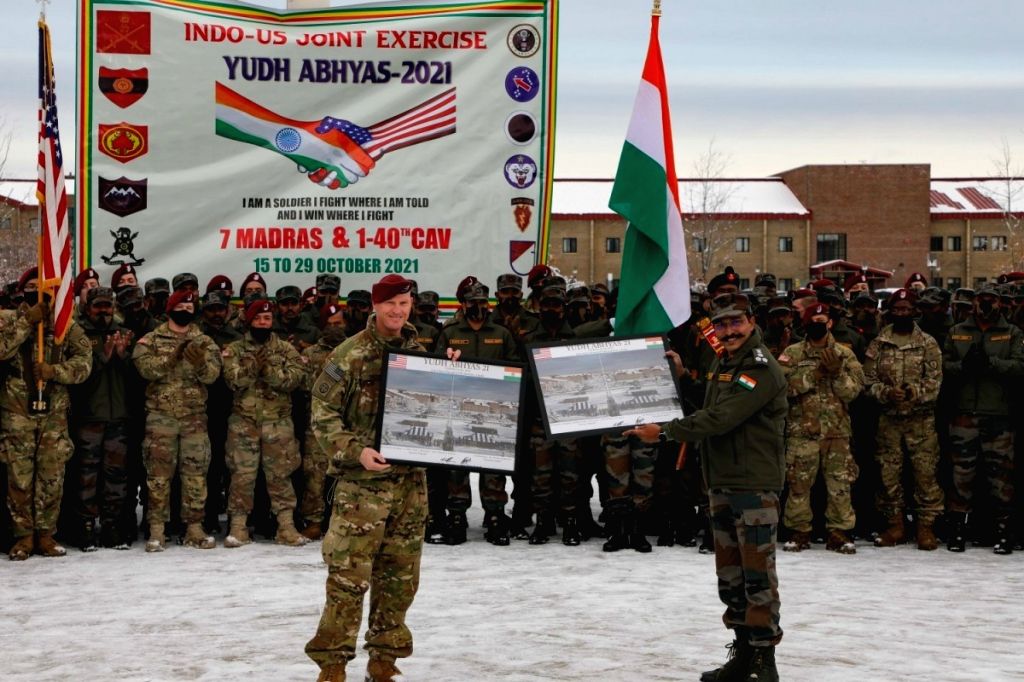 The soldiers from the two countries practised yoga and for building camaraderie played kabbadi and American football.

With India deeply entrenched in the United Nations Peacekeeping operations as the largest contributor of troops, the exercises included a simulation of a UN mission with the US that does not contribute regular troops to the UN. They shared “their best practices in planning, coordinating and executing military missions as a combined staff,” the US Army write-up said.

A civil servant who embraced empathy