For a more harmonious and cooperative South Asia, India must lead by example

India with its huge numbers and relative political stability can play an influential role in the South Asian region, writes Nirupama Sekhri for South Asia Monitor

As indicated in the table below, each South Asian country has a clear religious majority of Hindus, Muslims or Buddhists. Yet, in the immediate aftermath of independence, the constitutions of all committed to respect and accept all faiths, even if officially recognizing a state religion.

Unfortunately, over the decades, there has been increased persecution of minority groups, most brutally in Afghanistan and Myanmar and, increasingly, to an extent, in the other South Asian countries. Myanmar, though politically not considered a part of the South Asian region, shares many social and cultural affinities and connectivity projects with South Asian countries. 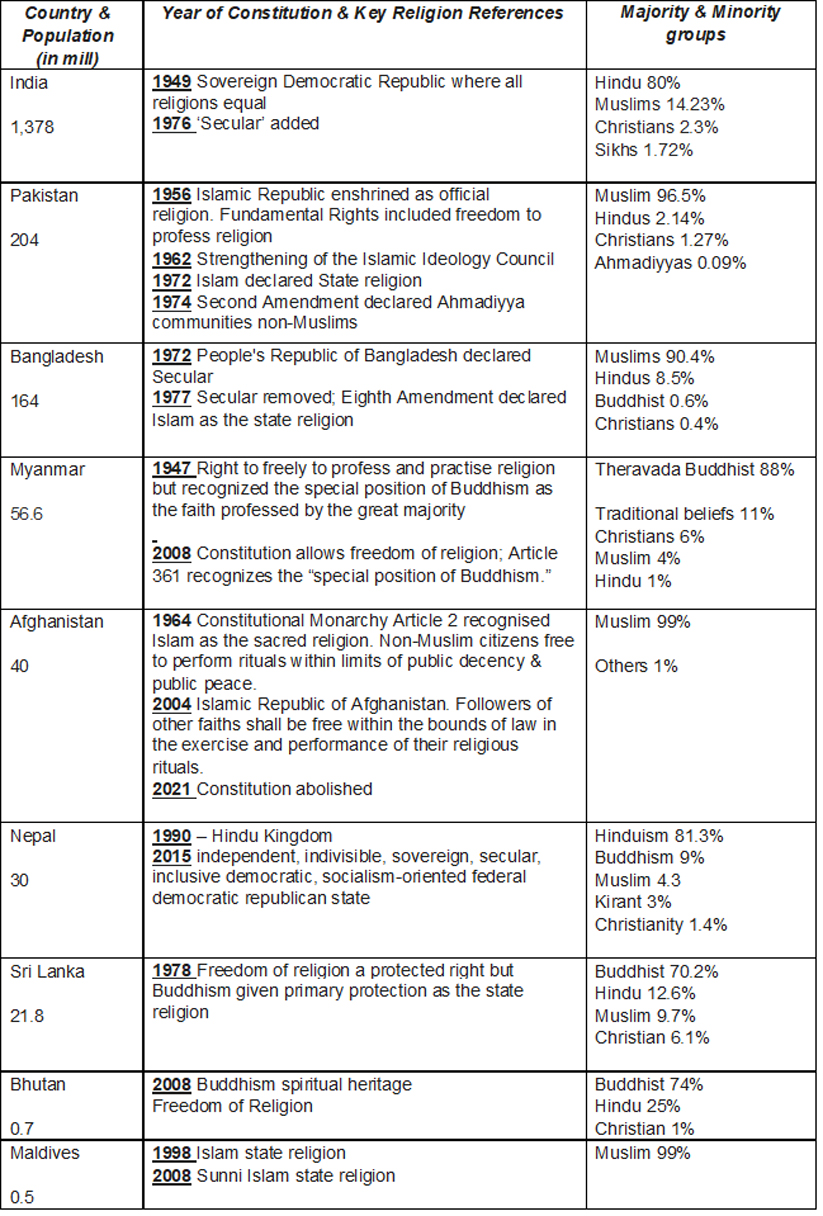 (The table mostly sourced from the World Bank and constituteproject.org sites is indicative not exact or exhaustive)

Afghanistan has been politically unstable for decades with an urban-rural divide much deeper than in other South Asian countries. This was laid bare by the almost instant collapse of Kabul’s US-propped government last year after US troops pulled out. The hardline Taliban seized power, abolished the 2004 Constitution in August 2021, and in September instituted the Ministry for the Propagation of Virtue and Prevention of Vice which has been accused of upholding a narrow and strict interpretation of Islamic law through violently coercive means.

It is not just Christians, Hindus and Sikhs but even the minority Shia community that feels under threat in Afghanistan, now more than ever before. There is the problematic, and now increasingly dreaded, blasphemy law under which people can be tried and sentenced, even to death. The US Commission on International Religious Freedom (USCIRF) has put Afghanistan under its Special Watch List (SWL) – a category where minorities are considered under grave threat of practicing their religion.

The USCIRF has also put Pakistan and India in its ‘Countries of Particular Concern’ (CPC) category.

It may be argued that Muhammad Ali Jinnah had envisioned “secular principles to guide religious sentiments” in the founding of the nation enunciated in 1947. They Constitution guarantees 10 reserved seats for non-Muslims in the National Assembly and 23 in the four provincial assemblies and four seats for non-Muslims in the Upper House. However, while general seats have increased over the decades, the reserved seats haven’t in proportion, with some political parties calling for a removal of this reservation altogether.

Significant aggression against minority groups has been targeted towards Ahmadiyyas – a sect established in 1889 by Mirza Ghulam Ahmad in Punjab as an offshoot of Islam with the largest number of the community of over four million living in Pakistan. But it is rejected as "un-Islamic" by the religious conservatives, including the Pakistani government, which in 1984 issued a legal ordinance criminalizing Ahmaidyyas referring to themselves as Muslim. This put Ahmadiyya followers in a conundrum as their passport requires them to declare their religion - while declaring themselves Muslim can invoke the harsh blasphemy laws, ticking themselves as non-Muslims goes against their beliefs. Ahmadiyyas also find themselves unable to rise in government positions, including in university faculties, as well as being abused or attacked as human rights records show.

Bangladesh suffered two wrenching partitions – in 1947 and in 1971. During the former its Muslim population was 68 percent and Hindu 30 percent; by 1974, Hindus had dropped to 13.5 percent; and today Hindus constitute less than 8.5 percent of the population. One reason is the Vested Property Act 1974 that allows the government to confiscate the property of whoever they deem an ‘enemy’ of the state – a term that has included entire lands, farms, or property of Hindu families who have had even just one member of the family leave Bangladesh.

In addition, there are "attacks on the Hindu community in Bangladesh have been systematic over the decades," claims Rana Dasgupta, General-Secretary of the country's Hindu, Buddhist and Christian Unity Council. One of the worst witnessed was last year in October around the festival of Durga Puja when rioters vandalized tens of temples; leaving at least eight killed and 150 injured.

The fragile peace after the long, armed, civil unrest in the island between 1983 and 2009 was shattered most visibly in April 2019 when eight Islamist suicide bombers carried out attacks in three churches and luxury hotels in capital Colombo killing more than 250 people and injuring double that number. It also challenged the much-needed unity between minority Christian and Muslim communities that have already been increasingly targeted under the growing Buddhist nationalism.

In March, 2021, the Sri Lankan government banned the burqa as a symbol of “religious extremism” and prohibited the teaching of Islam in 1,000 religious schools. This was followed up in October with the government setting up a 13-member Presidential Task Force for One Country, One Law appointing the controversial Galagodaatte Gnanasara, who has cases against him for hate speech and inciting violence against minorities, and who is Secretary-General, Bodu Bala Sena, widely perceived as an extreme Sinhalese Buddhist nationalist organization.

Bhutan moved from absolute monarchy to democratic monarchy and adopted a Constitution in 2008 that recognizes “Buddhism as the spiritual heritage of Bhutan, which promotes the principles and values of peace, non-violence, compassion and tolerance ..” and appoints the Bhutan monarch, The Druk Gyalpo, as the "protector of all religions.”

This tiny “kingdom in the clouds” exercises tight control over its own citizens and visitors. Even though it was in 1972 that then-King Jigme Singye Wangchuk asserted the importance of Gross National Happiness (GNH), Bhutan itself has not been performing high on the global World Happiness Report and was placed 95 among 156 countries in 2019.

This popular, idyllic, tropical retreat for tourists from around the world is the smallest Asian country that strictly implements some of the most fearsome religious laws in the world. Its half-million tourists and over 50,000 foreign workers have to practice their religion (if wanted) in private. Even Muslim visitors are forbidden to enter mosques and offer prayers with Maldivian citizens. Most alarmingly, in 2014, apostasy (renouncing religion) was included as an extreme crime that can even earn capital punishment for anyone above seven years of age. This attracted strong criticism from the UN Human Rights Commission as it defies the International Covenant for Rights of the Child, but remains in place.

Nepal was involved in a lengthy civil war between 1996 and 2006 and was devastated by a mega-earthquake in 2015. It is struggling for political and economic stability. It has a law that prohibits missionary groups from converting others and proselytizing; such activities can attract fines, imprisonment or expulsion of foreigners. Unfortunately, hate speech is used regularly on political and mainstream media platforms that feeds an environment of fear and insecurity. A recent case being Transport Minister Renu Yadav publicly threatening opponents with violent reprisals.

India too has an uneasy history of violent communal and caste flare-ups that are not abating. By most human rights reports, incidents of communal lynching, hate speech, abuses against minorities have been particularly on the increase since the present BJP government came to power in 2014. The USCIRF has recommended designating “India as a Country of Particular Concern (or CPC) for engaging in and tolerating systematic, ongoing, and egregious religious freedom violations, as defined by the International Religious Freedom Act (IRFA),” that would be putting us in the same category as Myanmar and Pakistan.

India with its huge numbers and relative political stability can play an influential role in the region for a more harmonious and cooperative South Asia, which its people and governments must work towards.

(The author is a writer, researcher and educationist. The views expressed are personal. She can be contacted at sekhrin@gmail.com)