Internationally renowned academic Noam Chomsky has urged the United States and India to engage with the Taliban, work towards overcoming differences with other regional powers, and help the Afghan people rather than blocking ”the best of the options that are available”. He was speaking last Sunday at the tail end of a webinar titled “20 Years After 9/11: Impact on South Asia and South Asians” organised by the recently launched South Asia Peace Action Network, Sapan. Speakers shared stories of hope and inspiration, besides those of distress and challenges.

Chomsky was among the thought leaders and activists from across South Asia and the diaspora who gathered virtually to discuss the impact of “9/11” on the region and its people.

(The section with Chomsky is at this link)

“You are referring, of course, to the second 9/11, the one in 2001. There was a more serious 9/11 in 1973 — a far more serious 9/11”, said Chomsky, referencing the violent coup in Chile against the elected government of Salvador Allende.

“The second 9/11 led the US to first invade Afghanistan…” he said, noting the United States had rejected the Taliban’s offer to surrender “because our focus was not Afghanistan but Iraq, and Central Asia and the Middle East… The invasion has led to catastrophe for Iraq and the entire region”.

About the way forward in Afghanistan today, Chomsky underscored the need to engage with the governing authorities to mitigate and overcome human rights violations, while working with Afghans on the ground especially in rural areas rather than focusing on Kabul.

Chomsky advocated pressuring Afghans to shift the economy from opium cultivation to mineral resources, encouraging trade, development, and their integration into the region — “these moves can’t be made through sanctions”.

“It is not about being optimistic. It is about finding the best of the options available”, he said in response to a question by filmmaker Gita Sahgal, one of the participants in the worldwide webinar.

“Uppermost should be the fate of the Afghan people. Engagement “does not mean overlooking the abuses,” he said.

Earlier, journalist Beena Sarwar played a clip from her documentary Chomsky in Pakistan, broadcast on VPRO Dutch television, documenting Chomsky’s November 2001 visit to the country for the third Eqbal Ahmad Memorial Lecture series in honour of his old friend.

Organisers also played clips from Eqbal Ahmad’s 1998 talk, ‘Terrorism, Theirs and Ours’ at University of Colorado, Boulder, about who and what defines terrorism.

Rumi is himself survivor of an assassination attempt that killed his driver, one event in the spiral of violence unleashed in the aftermath of 9/11.

The events of 9/11 led to a “seismic and epistemic shift” in the consciousness of the world, said Radhika Coomaraswamy, foregrounding the Afghan people with an expression of solidarity.

“The first impact of 9/11 was fear – fear that would be manipulated, assuaged by appealing to national security, and the most draconian laws would be passed. “We need to de-programme the system of criminal justice,” she said.

Dr Coomaraswamy outlined how 9/11 spawned endless wars, endless hate, and a military-industrial complex of armies, defence contractors, private contractors, and mercenaries for whom war has become a way of life.

Former Minister of Women’s Affairs of Afghanistan Sima Samar also paid tribute to victims of the “9/11” attacks and subsequent war in her country which has received the brunt of the pressure — “we don’t know how many bombs were put in Afghanistan.” 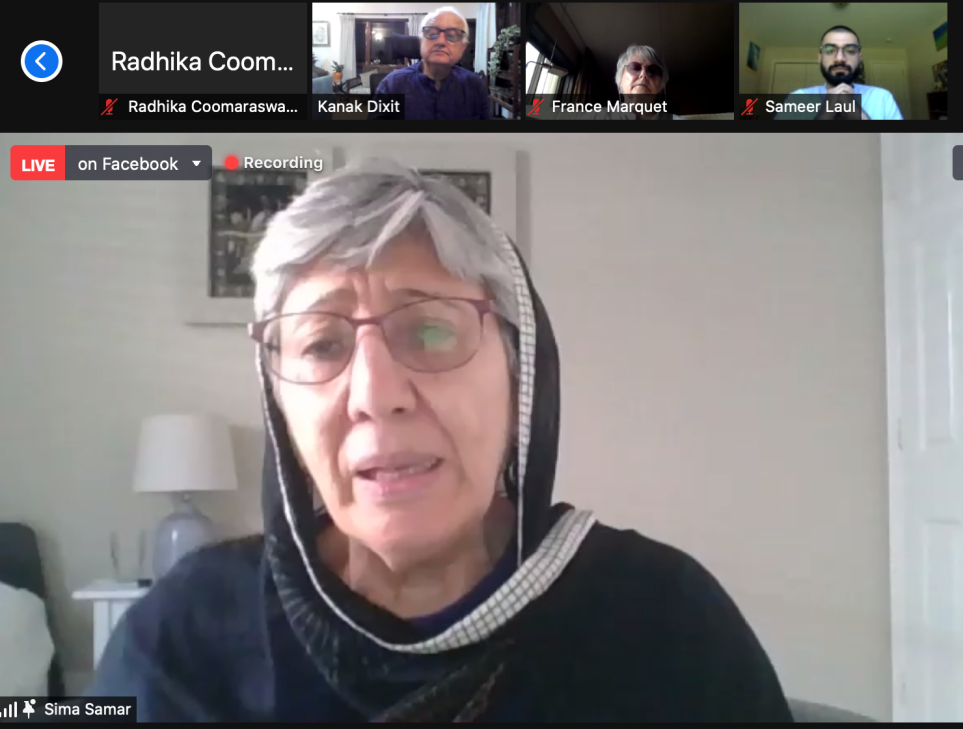 Dr Sima Samar: The pain of the Afghan people, especially women. Screenshot from Sapan webinar, 26 September 2021.
The ongoing repercussions are visible not only in other South Asian countries but around the world, with a visible change being harassment and extra screening for travellers. But more dangerous are the laws and regulations made in the name of the counter-terrorism activities which are violating fundamental human rights, she noted.

A former Air Force pilot in Bangladesh Rais Bhuiyan moved to the United States shortly before “9/11”. He shared how his race and ethnicity made him a target after 11 September 2001. The man who shot him in the face ten days later had already killed an Indian and a Pakistani. 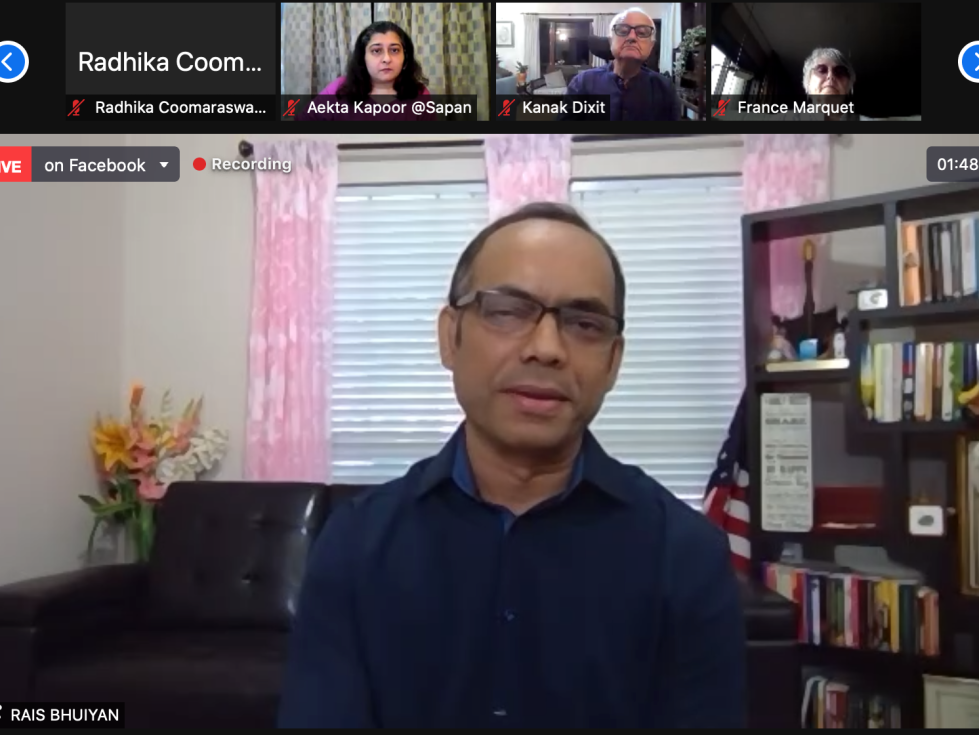 Rais Bhuiyan: The power of love and forgiveness. Screenshot from Sapan webinar, 26 September 2021.
Repetitive footage of the planes crashing into the twin towers, accompanied by the rhetoric “made Mark mad” said Bhuiyan, talking about his attacker, a white supremacist named Mark Stroman.

Bhuiyan made a promise to himself that if he survived, he would spend his life in the service of humanity. It has been a struggle. He lost sight in one eye, and also lost his home, job, fiancé, and sense of security. With no medical insurance, he gained USD 60,000 in medical bills. “I felt discarded and dehumanised”.

But from this pain emerged his non-profit World Without Hate, with the hope that together we can build a world without fear, without violence, without victims. He not only forgave his attacker but also campaigned to overturn his death sentence. The effort moved Stroman, who was executed in 2011, to call for hate to stop, saying that “hate causes a lifetime of pain.”

The power of forgiveness also came across strongly in remarks by Mejindarpal Kaur, who remembered Balbir Singh Sodhi, one of the first victims of the post-9/11 hate crimes. Even today, “Every other day I receive a request for help from our chapters around the world”.

For Sikhs, the world changed forever, with their articles of faith being equated with “terror” as they began being mistaken for Muslims. The Sikh community has taken a stand with Muslims instead of disassociating themselves. It’s an ongoing struggle, said Kaur, and we can’t give up. Those perpetuating evil are not going to look for answers about how to stop the hate.

She ended on a note of hope invoking the Sikh principle of Sawa Lakh – that one shall defeat 125,000. It is the people with the Sawa Lakh spirit who will defeat the warmongers.

From Dhaka, Khushi Kabir commented that “9/11” led to South Asian states using “anti-terror” laws to curb democracy and free speech. Highlighting the rise in bigotry and othering of visible minorities everywhere, she expressed concern about the discourse on rational thinking and secularism taking a backseat.

People’s Union of Civil Liberties activist Kavita Srivastava in Jaipur noted that India is reeling from hate crimes and criminalisation of Muslims. Given India’s massive population, “if we do something, it reverberates in the region”, she added.

Journalist Umaima Tahir in Lahore remembered her late husband Tahir Wadood Malik, who succumbed earlier this year to the coronavirus pandemic. A former Pakistan army major, his first wife was killed in a suicide attack in Islamabad, 2009. He struggled with PTSD and had founded the Pakistan Terrorism Survivors Network.

“The system alienates and isolates victims of terrorism. Tahir struggled all his life for the right of each victim of terrorism to be counted. Today when I hear stories from Afghanistan and Sri Lanka and India and Bangladesh, it always hurts, because these are not just numbers. These are stories. These are people. They are loved ones who have been lost”, she said.

Communications consultant Pragya Narang presented an overview of the impact of response to 9/11 on South Asians, including research findings from a preliminary study conducted by the Sapan team to assess the impact of “9/11” twenty years on.

The meeting also commemorated visionaries of South Asia peace movement and extended condolences to those who passed away this month, with a presentation by researchers Sarita Bartaula from Kathmandu and Muhammad Waqas from Lahore.

Prominent feminist Kamla Bhasin, a staunch supporter of Sapan who recently passed away in Delhi, was among those honoured.

Speakers’ bios are available at this link.

Initiated in March 2021, Sapan is a coalition of organizations and individuals who advocate peace, justice, democracy, and human rights in South Asia, working towards a visa-free South Asia.

(By arrangement with Sapan News Service)