Taking a respite from the dull election campaign and social distancing due to COVID-19 pandemic, Colombo's elite is currently fascinated with a fictionalized biography of Sri Lanka’s first female architect Minnette de Silva, who passed away in 1988 when she was 80 years old

Taking a respite from the dull election campaign and social distancing due to COVID-19 pandemic, Colombo's elite is currently fascinated with a fictionalized biography of Sri Lanka’s first female architect Minnette de Silva, who passed away in 1988 when she was 80 years old. Minnette and her sister Anil, daughters of former health minister George de Silva, were most sought after socialites of Bombay (now Mumbai) seven decades ago. And while Minnette was the favourite partner of renowned French architect Le Corbusier, her sister Anil de Silva was the assistant editor of Marg, the journal founded by the award-winning novelist Mulk Raj Anand.

The fictional biography titled Plastic Emotions, written by Shiromi Pinto, brought out many scandalous relationships with most famous personalities such as Pablo Picasso, David Lean, Lawrence Olivier, Le Corbusier, Mulk Raj Anand, Peter Finch and Vivien Leigh out in the open and it provided a much-needed respite from endless political news on the forthcoming general elections slated for August 5.

Shiromi Pinto, in her author’s note in the book, Plastic Emotions (London: Influx Press, 2019; 425 pages) says, the title Plastic Emotions was borrowed from a statement penned by Le Corbusier "An engineer follows a sure and certain path. An architect provokes plastic emotions."

"This is a work of fiction. Minnette de Silva and Le Corbusier are, as we know, fact. But how they interacted, who they were friends with, indeed, what they wrote to one another – these were all fodder for the writer. Much like Minnette’s gorgeous saris, real or imagined, fact and fiction have been woven together to create this narrative. Whether it matches the subtle weave of those saris is up to the reader." 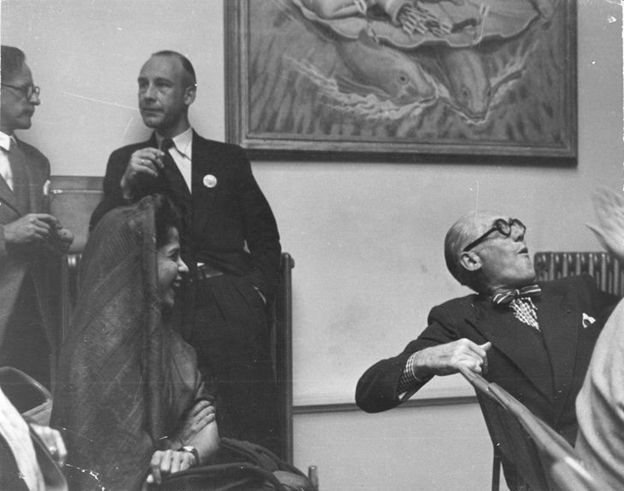 Corbusier, a famous architect, designer, painter, writer, and urban planner, who planned the modern city of Chandigarh in India, and one of the pioneers of what is now called modern architecture, was very fond of young protégé Minnette. The author quotes from a letter from Minnette in London to Le Corbusier dated 28 May 1949.: "Corbu, Corbu, Corbu. You would have thought me mad writing your name so many times in my diary. In the writing comes reality – the reality of you. How I long for that certainty now. The certainty of you. Who else can sustain me…" And in a later letter, "How I wish you were here my love! I long for your arms…" 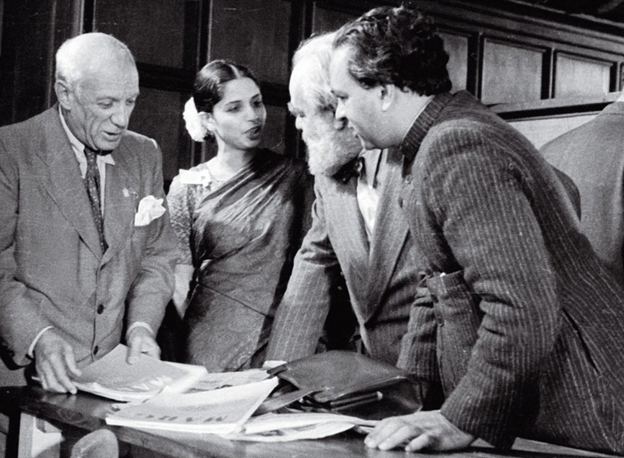 The chapter on Corbusier’s first visit to India and bits about Jai Singh and the ideas behind the creation of the new city are very interesting. The author quotes the architect, "Nehru asked me because he knows that India is ready to embrace modernism, that Chandigarh will be the symbol of this shift." Jawaharlal Nehru was India’s first prime minister.

Minnette met Corbusier in 1947 at the International Congress of Modern Architecture (CIAM) meeting in Bridgwater, Somerset, and she was attracted to the world-renowned, aging Le Corbusier (1887 –1965). Subsequently, he stayed in her penthouse flat in Berkeley Square. In 1948, she had to return to Sri Lanka as her father, the health minister, insisted that the newly independent country needed qualified people to serve the country and its people. Though George de Silva was a very rich aristocrat, he refused to pay for her prolonged stay overseas. 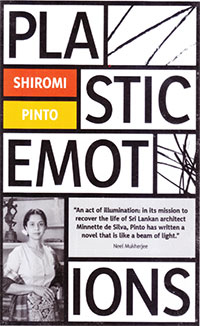 In 1939, Minnette pursued studies in architecture at the Bombay School of Architecture, where she was the first female student. Her sister, Anil, joined her in Bombay and she was one of the founders of the Indian People's Theatre Association (IPTA). While in Bombay, she became a close friend of Mulk Raj Anand, acclaimed writer, member of the Progressive Writers' Movement, an art historian and member of the Communist Party of India. Anil became the assistant editor of his journal Marg, which covered traditional and modern art and architecture. She was the assistant editor of Marg from 1946 to 1948.

Through Marg, Anil became associated with the promotion of modern art and held many art exhibitions; one such exhibition was of George Keyt in India. With Pupul Jayakar, she co-edited the children's magazine Toycart.

There are references to Mahatma Gandhi and Jawaharlal Nehru in Pinto’s book quoting Minnette’s diaries. When Nehru visited Kandy they stayed with their friends, George and Agnes de Silva (Minette's parents), in their home in the Hill Capital. The main road to the ancestral De Silva Residence is now named George E de Silva Mawatha. "Minnette was little more than a girl back then, but Nehru spoke to her without condescension. He was intelligent, charming, and immaculately turned out." Colombo’s Sunday Island People & Events columnist Nan confirms those quotes were from Minnette’s memoirs.

The book also makes a reference to Nehru and another Indian woman. “Nehru wasted no time in taking a young lady who was not his wife, boating on Kandy Lake in full view of Kandy’s evening strollers." This too is mentioned in the memoir.  Kandy is a city in mountainous central Sri Lanka.

In her letter to Corbusier, Minnette says, "Gandhi must have seemed a terrible throwback to him (Nehru), clad in that white dhoti”. However the columnist Nan pointed out that the remark was derogatory and degraded Nehru. Nowhere is it mentioned that Nehru had reservations about Gandhi’s appearance or dress,  even in London when they went over for round table discussions. Viceroy Mountbatten and his elite wife Edwina wholeheartedly welcomed Gandhiji in this attire to the Viceroy’s Palace, how would Nehru object to his garb, was the question Nan raised.

The book also comments on Gandhiji and his wife Kasturba. "Though he did seem an awful husband, she thinks, recalling how he ignored Kasturba so that Amma (Minnette’s mother) felt compelled to take her for a drive. Amma had later told her that Kasturba wept in the car: no one had ever done such a thing before." This incident is written in Minnette’s memoir.

It is known that Minnette had a strong relationship with David Lean, British and Hollywood director/producer who was in Ceylon for the film Bridge over the River Kwai (1957),  Nan says David Lean, it seems, desired a permanent relationship; marriage probably. When Elephant Walk was filmed in Kandy (1954) Vivien Leigh fell in love with Peter Finch and came in for a nervous breakdown. Her then-husband Lawrence Olivier was brought down to Ceylon. He reportedly had an affair with Minnette, columnist Nan says.

Minnette was Asia’s first woman architect and the second woman in the world to have an independent architectural practice. She is still recognized and acknowledged for her pioneering ideas in architecture, achieving due fame in her own country.

Anil published several books including The Life of the Buddha Through Painting and Sculpture (1955), The Art of Chinese Landscape Painting: In the Caves of Tun-huang (original edition 1964, translated in English in 1967), (1964) and This Moste Highe Prince: John of Gaunt, 1340-1399. She also co-edited a series on "Man Through His Art" for UNESCO. She was married twice, first to an Englishman Robert Nichol-Cadell and she resided in England from 1933 to 1938. However, this marriage did not last and she moved to Bangalore and from there to Bombay, where she joined her sister Minnette who was pursuing studies in architecture.

Later, Anil moved to Paris, where she married Philippe Vigier, a Frenchman. In Paris, she studied at the Louvre for a course in art history, the first Asian to do so. In Paris, studying the arts exhibited in the museums, particularly at the Musee Guimet, she learned to appreciate Asian art heritage. In 1956 she presented a television programme on the BBC titled "Asian Club." Anil lived in Cambridge until her death in 1996.

Minnette never married and she lived her last days in Kandy in a house designed by her until her death in 1998.

(The writer is Director (International Media), Presidential Secretariat, Colombo. The views expressed are personal. He can be contacted at sugeeswara@gmail.com)

ADB disbursed loans worth $4.6 bn to India in 2021; a third of it for pandemic response

Is a strong, 'muscular' India losing out on peace and harmony?

Covid-19 cases down, India to issue tourist visas from October 15