Water is not distributed evenly across Pakistan

The allocation of the waters of the Indus river system between the provinces of Pakistan was a historic agreement. This agreement, known as the Water Apportionment Accord (WAA), was signed into effect in 1991. Normally such allocations have the following objectives: equity, environmental protection, development priorities, balancing supply and demand, and promoting the efficient use of water. Plans are reviewed against these defined merits.

The use and allocation of water within the Indus basin is heavily affected by the institutions and policies that prevail at the international level. Water conflicts between the provinces of Pakistan predate the 1947 partition of India and are a classic example of upstream-downstream riparian conflicts. After 1947, irrigation water was allocated between the provinces through informal, ad hoc arrangements. Eventually, several commissions and committees led to the apportionment of waters in 1991. The accord comprises 14 clauses and eight appendices, signed by the highest officer of each of the four provinces of Pakistan and ratified by the prime minister.

Unfortunately, the WAA lacks a clearly stated objective and instead provided insights into the challenges that it is yet to overcome – namely, a lack of development of water resources, suboptimal use of additional water made available after the completion of the Tarbela dam in 1976, and unrealised economic and employment opportunities. This makes it difficult to review the accord’s first 30 years against its objectives. Over the next 30, demographic, socioeconomic and climatic changes in the Indus basin will place the WAA under increased scrutiny.

One overarching aspect of the accord was an agreement that the division of the Indus river system’s waters should be settled as quickly as possible. Despite a lack of consideration of numerous objectives, including environmental protection, change in consumptive water use, climate change and others in the WAA’s water allocation framework, the accord is considered a success by many for having maintained water harmony among the provinces.

This success is usually assessed by quantifying the volume of water delivered to each province (in each season and year) and how this corresponds with the WAA’s allocations. However, this leaves a critical question that needs further assessment: “Are these allocations and corresponding water deliveries justified at lower spatial scales, e.g. at district levels?” This article explores this question and the accord in the context of its implementation at the district level, seeking to understand whether the apportionment of water between provinces caused disparity among the districts.

For this analysis, we used data that has become available for the 20 main canals in the system that covers 42 districts of Pakistan. Historical deliveries to the canals, averaged for the period 1991-2010, were used on a 10-daily time scale (water planning is carried out in 10-day chunks in Pakistan). The deliveries were proportionally divided among the district areas and subsequently the water availability per unit of ‘command areas’ in each of the districts was calculated, in millimetres per day. Command area is defined as the cultivatable area under the canals.

Delivery of water to the 20 main canals in the system covering 42 districts of Pakistan, between 1991 and 2010 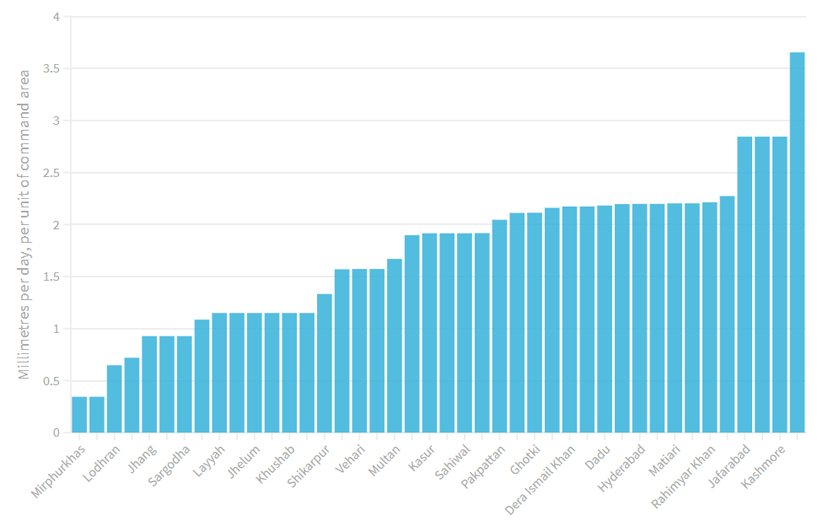 It is evident that the districts of Sindh are receiving more surface water per unit of command area compared with southern Punjab districts. The groundwater resources are mostly saline in Sindh; this could be why Larkana, Jacobabad, Dadu and Thatta receive more surface water supplies. Similarly, some of the districts of central and north-west Punjab, including Bhakkar, Jhang, Layyah and Mianwali, receive less surface water per unit of command area compared with the districts in south-east Punjab, including Pakpattan, Vehari, Bahawalpur and Bahawalnagar. Thus, it becomes hard to ascertain whether the accord does justice in apportionment or there is a degree of perceptible unfairness.

Moreover, the current accord is at the province level, implemented by the Indus River System Authority (which regulates and monitors the distribution of water). The WAA does provide allocations at the canal command levels, but they are not overseen by any authority that can safeguard water deliveries at these levels. Our research shows that there is space for more discussion that encourages us to look deeper into the explanations and propose solutions for the significant variations between the districts.

Do we need to update the accord?

The apportionment accord has remained unchanged for more than a quarter of a century. Ever-changing dynamics, such as the threat of climate change, the ticking time bomb of increasing demographic pressure and changing cropping patterns, mean there is an urgent need to revisit the WAA and address surface water allocations at the district levels to ensure future demand is met.

(Zia ur Rahman Hashmi is head of water resources and glaciology and Haris Mushtaq is a research analyst at the Global Change Impact Studies Centre in Pakistan. Taimoor Akhtar is a senior research fellow at the University of Guelph in Canada. The article first appeared in The Third Pole)

Hundreds of inmates suffering from coronavirus across Pakistan