South Asia has an approximate population of 1.9 billion —about 23 percent of the world population — with a substantial number of slum dwellers and homeless, writes Nirupama Sekhri for South Asia Monitor

After the first Covid 19 case in Nepal was confirmed on January 23, 2020, by February end many countries had started to close their borders and most implemented lockdowns by March end, confining people to their homes. The unprecedented action came as a shock and was difficult enough for people who live in houses that boast separate spaces for different functions — kitchens and toilets with running water, proper sewage, heating and cooling systems, and so on –a demographic of a mere 20 percent of the population in most South Asian countries (excluding Bhutan and Sri Lanka).

In comparison, the situation of the remaining 80 percent who live in poorly designed, semi-pucca or kutcha (walls made up of bamboo, mud, grass, reed, stones, thatch, straw, leaves and unburnt bricks) mostly single-room spaces – in cramped neighborhoods and slums, without most amenities accepted as ‘normal’, was beyond distressing and alarming. And it is this issue of ensuring quality housing to all that needs to be taken up as a critical priority by South Asian governments.

South Asia has an approximate population of 1.9 billion —about 23 percent of the world population — with a substantial number of slum dwellers and homeless. The table below with indicative figures paints a disturbing picture (World Bank or national government figures between 2014-20). 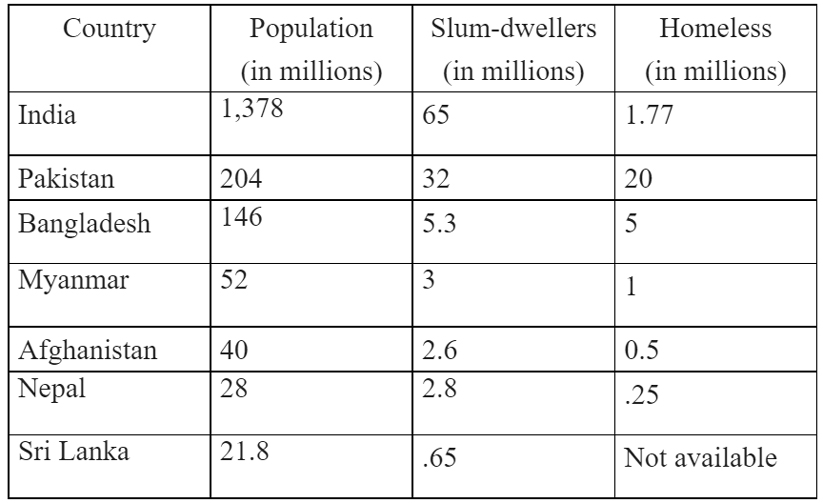 Looking only at these numbers one can see that the scale of the problem is staggering. If you also take into account the socio-economic impacts of such large populations living in slums or being homeless then the enormity of the problem multiplies manifold.

Huge as the challenge may be, yet undertaking affordable housing programs also offer tremendous opportunities through increased employment and manufacture if holistically treated by governments.

A 2017 Times of India report analyzed the National Sample Survey Office (NSSO)  69th round survey report and compared Indian housing conditions with the Model Prison Manual 2016 and found that about 80 percent of the poorest rural households have an average floor area equal to or smaller than 449 sq ft. or size of a model prison!

Both are smaller than the 96 sq ft of the ground area recommended for prison cells. So, the size of houses and how many people live in them is another dimension that policies must address to ensure a healthy standard of living. Merely labeling housing colonies as LIG, MIG, HIG according to Low-Medium-High Income Groups is insufficient, a far more robust balance of land and house costing, price and affordability have to be made.

Even if the home size is small as in densely populated cities like Hong Kong or in Japan, yet, safe, open, public spaces help for walks, jogging, recreation, and so on. During the pandemic, housing societies with open spaces greatly benefited as it allowed residents staggered timings for walking, jogging, and so on.

Legislating sufficient open spaces in and around housing complexes in proportion to the population must also be an important part of housing plans.

Washing of hands was one of the most basic protocols for Covid safety. However, access to drinking and washing water with sanitation was woefully little in most South Asian countries. One-hundred percent access to clean water and sanitation also is an urgent imperative for housing plans. 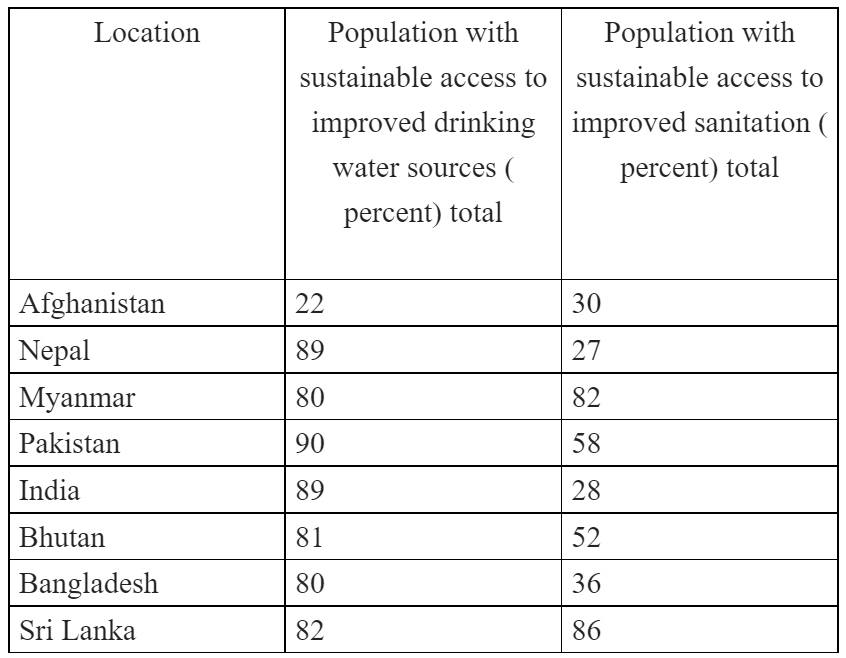 A primary study – Influence of housing quality on public health in Lahore, Pakistan - conducted in the slums of the country’s second most populated city after Karachi where 40 percent of the population lives, showed a direct correlation between living in slums and higher incidences of diseases like tuberculosis, respiratory problems, skin infections, etc. It also showed an increase in problems of depression, deficiency of vitamin D, anxiety, obesity, diabetes and cardiovascular diseases. The study concluded that the health of the community can be significantly improved with better housing conditions. Housing plans must ensure climatically sensitive design, material and building, ventilation, lighting, kitchen fuel, and population optimal numbers.

The problems of housing have historic, political and social roots. Each South Asian country (except Bhutan) has a colonial history and the British just went along with the status quo, putting effort into building only for their officers and staff. So, while back in England housing and urban development were being planned and policies being drafted and executed, in their colonies it was for only the colonial administration.

Bangladesh till 1990 had 85 percent of the population living in slums.

In addition, there is the problem of natural and man-made disasters – floods, drought, earthquakes, as well as war and strife and internal conflict – that have forced people to flee to safer places. The Tibetan, Rohingya and Afghan refugees are some of the prominent examples.

However, the most important seems to be the lack of will. While there is no doubt that slogans have been coined and heads of government from Imran Khan (Roshan Apna Ghar) to Narendra Modi (Pradhan Mantri Awas Yojana) to Sheikh Hasina (Ashrayan-2 Project) have inaugurated and flagged special and public housing schemes, the reality on the ground remains bleak.

(The writer is an educator and a commentator on social affairs. The views expressed are personal)