The digital economy gives a strong option for all countries of South Asia to connect not only within themselves but also globally, writes Partha Pratim Mitra for South Asia Monitor

COVID-19 has affected children in South Asia quite severely. With most schools still closed, more than 430 million children have been unable to return to their classrooms. Lessons delivered through remote learning are bridging the gap to some extent, but poor connectivity and inadequate coverage leave many  children struggling to keep up with the progress.

Prospects of a  global recession threaten to affect  South Asian countries hard, resulting in rising numbers  in unemployment and  intensity of poverty, which threatens to reverse the region’s broader development canvas.

Even before the pandemic struck, the region was struggling with a serious learning crisis, with 31.8 million primary and lower-secondary age children either out of school or at risk of dropping out. Quality has been a longstanding issue as well; millions of South Asian children complete primary education without acquiring basic literacy and numeracy skills..[i]

South Asia, which is home to more than 1.8 billion people, with 1 in 10 living below the international poverty line of US$1.90, suffers from poor population health and nutrition, educational attainment, and social protection measures.

The region experienced 1.5 million under-5 deaths in 2018, a number that was next only to Sub-Saharan Africa. The South Asian region has one in three children under five years of age, who are stunted. which only add to the unhealthy physical growth of children.

These aggregate figures hide the inequities that exist within the region. Children living in rural areas and poorer households face a higher probability of being less likely to be able to access remote learning.

The impact on the younger children, who are within the most sensitive age-groups for learning, are also likely to be even substantial. 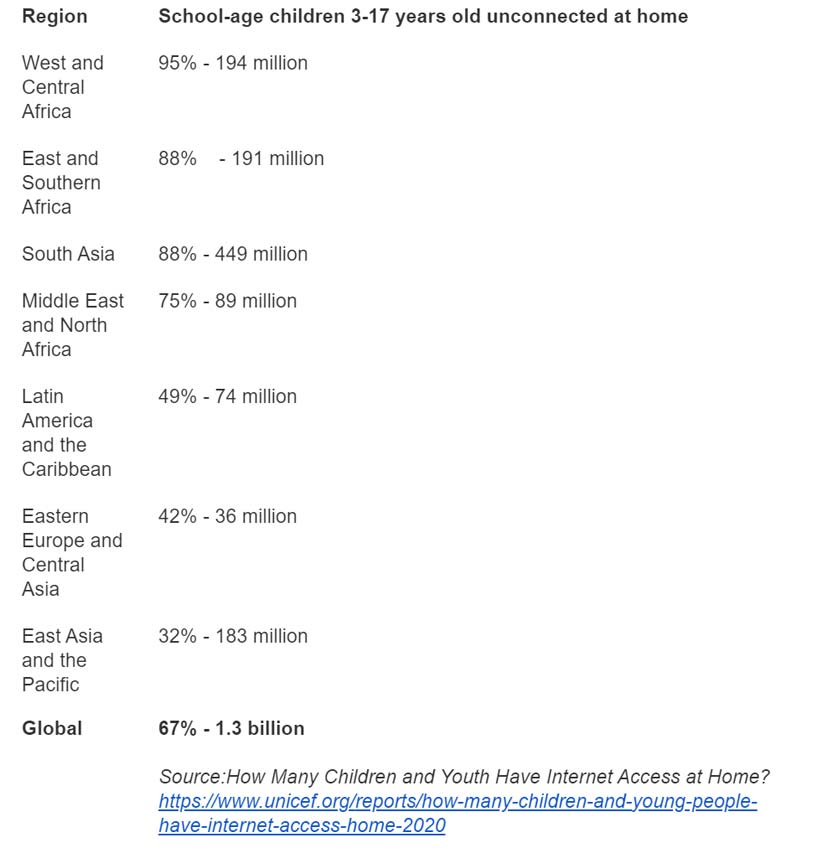 Temporary school closures in all South Asian countries have had major implications for students. While most governments have attempted to mitigate the impact of school closures, it has been extremely difficult to engage children through remote learning initiatives.

This transition from physical to remote learning modes has resulted in large-scale dropouts and substantial learning losses, which threaten to  have a lifetime impact on the productivity of a whole generation of students.

The pandemic may cause up to 5.5 million students to drop out from the education system. The impact on learning is equally enormous. Being out of school over long periods of time imply that children not only stop or face considerable difficulties in covering new material, but they also forget some of what they have learned earlier .

The phenomenon of overall access to education must be seen as a larger manifestation of the overall crumbling of the informal economies that countries of the South Asian region have faced in these difficult times.

It began with the travel restrictions that have wiped off entire tourism and labour outmigration which have been major sources of earnings for the informal sector in these economies.

In some countries related logistical difficulties and restrictions on repatriations for funds have further added to the difficult economic situation.

Decline in earnings from the construction sector,  another source of major earnings for the informal sector, has further affected countries of the South Asian region.

The impact of  lockdowns  and subsequent gradual opening had an overall effect of  depressed domestic supply and demand, as businesses, particularly small-scale units, which form the backbone of  the economies  of the South Asian region, were unable to operate and consumers also postponed or reduced  expenditures, triggered  a severe  contraction in output and imposed  significant social hardship on poor and vulnerable households – specifically urban migrants and workers in the informal economy.

The lockdowns had far-reaching consequences in other sectors of the economy as well. For example, the education sector came to a near standstill and efforts to teach children during school closures proved challenging.

One of the important reasons for the difficult situation in the informal sector is that the service sectors that were affected most by the lockdown and subsequent gradual opening are dominated by informality.

Many informal workers also tend to be more exposed to the pandemic due to their involvement in the provision of services that require person-to-person interactions. Isolated, home-based work is not an option for them. With narrow internet penetration in the region, digital alternatives seem viable for only a small share of the informal sector[iii]

Addressing the overall issue of informality is thus essential and urgent to support inclusive economic development and reduce poverty worldwide.

The COVID-19 pandemic has only reinforced this sense of urgency: its wide-ranging and debilitating impact on informal activities worldwide has highlighted the need for governments to provide a lifeline for large segments of the population not covered (or not well covered) by existing social protection programs.

Designing effective policies to address informality is, however, complicated by its multiple causes and forms, both across and within countries.

Informality, critically affects how fast economies can grow, develop, and provide decent economic opportunities for their populations. Sustainable development requires a reduction in informality over time, but this process will inevitably be gradual because the informal sector is currently the only viable income source for billions of people. Informality is best tackled by steady reforms—such as investment in education—and policies that address its underlying causes. Attacks on the sector motivated by the view that it is generally operating illegally and evading taxes are not the answer[iv]

The pandemic has highlighted inadequacies in the health care systems of even the most developed nations. In South Asia, it served as a reminder that too many face financial hardships to get the critical care they need. At the same time, school closures threaten to hold back this generation of students, as much of the region lacks reliable and universal access to internet connectivity, At this critical juncture, South Asian economies must not only reflect on how best to return to growth, but also on how to address the existing challenges and enhance their resilience, inclusiveness, self-reliance and sustainability. Further digital-led growth in the region will not only bring significant economic returns but also help bridge existing divides in access to education and healthcare, financial inclusion and public service delivery[v]

The digital economy gives a strong option for all countries of South Asia to connect not only within themselves but also globally.

It is a reality which all countries of the region realise and have made efforts to get the digital infrastructure in place to catalyse the growth process.

The question, however, remains whether such infrastructure will have the bandwidth to integrate itself with the ground  realities of the region which consists of a large  informal sector, economic disparities and lack of  digital access to vast segments of the population that derive their livelihood from the informal sector.

While increasing digital access would be an important way of making government programmes accessible to more people, it certainly needs to be integrated  to create job opportunities in the region, reduce informality by improving the quality and conditions of work and ensuring social protection to all consisting of pensions, medical  and unemployment insurance.

All countries through intra-regional cooperation within the South Asian region need to address together these formidable core issues, which are difficult for them to do so individually.

(The writer is a retired Indian Economic Service officer who worked in the labour ministry. The views expressed are personal. He can be contacted at ppmitra56@gmail.com)

[ii] Direct and indirect effects of the COVID-19 pandemic and response in South AsiaCommissionedbyUNICEFThis report was commissioned by UNICEF and was implemented by SickKids, Center for Global Child Health, to evaluate the direct and indirect effects the COVID-19 pandemic in South Asia.{ March 2021 p7-25 https://www.unicef.org/rosa/media/13066/file/Main%20Report.pdf

[iv]DeléchatCorinne and Leandro MedinaWhat Is the Informal Economy? Having fewer workers outside the formal economy can support sustainable development,Finace and Development,2020 p54-55https://www.imf.org/external/pubs/ft/fandd/2020/12/pdf/what-is-the-informal-economy-basics.pdf

The troublesome inside story of East Pakistan: A handbook for students and researchers of contemporary history