India wants every Indian citizen abroad to have a right to vote in Indian elections, but the implementation of this decision is fraught with many practical challenges,  India's Minister of State for External Affairs V Muraleedharan said at an  Interactive session with non-resident Indians and the Indian American diaspora at the Hampton Hotel and Suites in Stamford, Connecticut

India wants every Indian citizen abroad to have a right to vote in Indian elections, but the implementation of this decision is fraught with many practical challenges,  India's Minister of State for External Affairs V Muraleedharan said at an  Interactive session with non-resident Indians and the Indian American diaspora at the Hampton Hotel and Suites in Stamford, Connecticut.

“The Ministry of External Affairs wants to offer opportunities for every Indian abroad the right to vote,” Muraleedharan stated. Pointing to the fact that Indians are spread over more in almost all 193 countries and coordinating the efforts and ensuring that all those who are eligible are given the opportunity to vote has been a major challenge, he assured the diaspora that he will address the issue and follow with the concerned officials.

“The role of the Ministry of External Affairs is to care for the Diaspora and my visit today is for the purpose of benefitting the Indian Diaspora,” he said.

“India is fully democratic. Judiciary is independent. Media is free. There is no substance to claims that the media is controlled” by the government, declared Muraleedharan, who had visited the United States to address the United Nations General Assembly earlier this week. 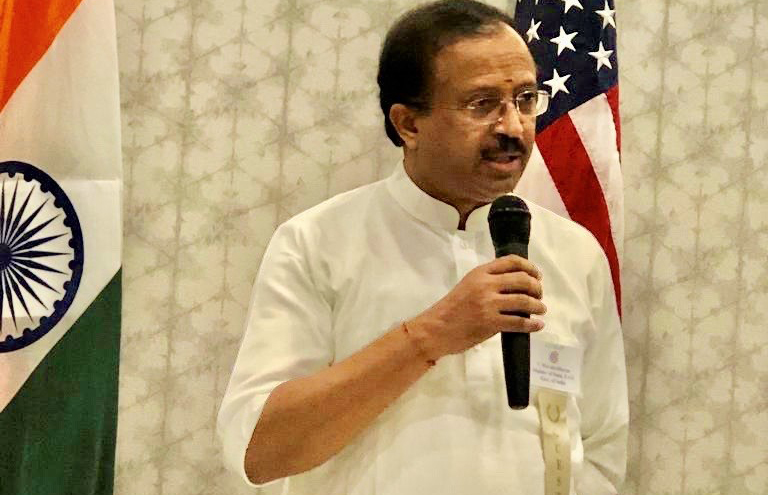 The event was organized by the Global Organization of People of Indian Origin Connecticut Chapter (GOPIO CT) along with the New York Indian Consulate in cooperation with other Indian community groups in Connecticut.  GOPIO International Chairman Dr. Thomas Abraham, chaired the meeting and brought to the attention of the minister some of the Diaspora issues as well as avenues of cooperation to promote India all over the world.

Dr. Abraham provided a brief history of GOPIO International, which was formed at the First Global Convention of People of Indian Origin in 1989 in New York, which has now grown into a Pan-Indian community organization for NRIs and PIOs with over 100 chapters spread in 35 countries. “We at GOPIUO are a partner with Indian missions abroad to protect India’s interest around the world,’ said Dr. Abraham.

Drawing the attention of the Minister on some of the issues of the NRI/PIO community, Dr. Abraham said, “We campaigned for Dual Nationality and the govt. came up with PIO Card and later on with the OCI card. We asked for voting rights for Indian citizens living outside India. Although voting rights are given, there has been very little participation because of the requirements of physical voting in India. The Election Commission has recommended Proxy Voting, but not implemented yet.”

He urged the government of India to appoint at least two Members of Parliament to the Lok Sabha or Rajya Sabha, representing the 32 million people of Indian origin living outside India, more than half of who are Indian citizens.

Other issues raised during the meeting included violence against Indians in South Africa; post-pandemic issues of Indian workers in the Middle East; challenges for NRIs to open and operate bank accounts in India and the cumbersome technical problems faced while submitting applications for OCI Cards; removing travel restrictions to India for people of Indian origin who are citizens outside India; and issues relating to OCI cardholders doing business in India, but are treated as foreigners in some areas.

Another issue brought out was the banking regulations for the Indian diaspora living overseas. Most have properties in India and they need to pay for taxes & utilities. But American credit cards are not accepted for most of such payments. And opening up an NRI bank account in India is a very difficult and tedious task. Muraleedharan said that he would look into all issues (SAM)