Indian American Pramila Jayapal, the leader of the progressive faction of the Democratic Party, has emerged as a powerful force in US politics pushing President Joe Biden leftward after holding his signature multi-trillion-dollar programmes hostage. Jayapal, 56, who describes herself as “South Asian” on her official website, but who was born in Chennai, India, is on her third term as a House of Representatives member.

In Congress, where the Democratic Party holds a slim majority, she shot down a plan carefully crafted by Speaker Nancy Pelosi to get moderates' support by sequentially getting voted in the House of Representatives Biden's $1 trillion plan for the nation's infrastructure and then another plan for over $2 trillion for wide-ranging social and climate change programmes.

Jayapal heads the leftist Congressional Progressive Caucus (CPC), a group of 95 within the 220 Democratic Party in the House of Representatives where the party has a slim edge of only eight over the Republicans giving her a potential veto.

In addition, the CPC has one senator.

Biden, who was expected to support Pelosi, instead came to Congress last week and agreed with Jayapal, sending the legislations to a limbo where party leaders are now trying to work out a compromise. The imbroglio arises because of the factionalism in the Democratic Party and the deep suspicions the left and the moderates have for each other.

The Senate had passed in August the $1 trillion infrastructure programme, known as the American Jobs Plan (AJP), which had the support of Democrats and some Republicans, but hasn't taken up the $2 trillion social programme called the American Family Plan (AFP) because of the opposition from the moderates over its cost and the range of programmes from free community college education to care for children and seniors.

The AFP would also raise taxes on the rich, whom Biden said would be those earning over $400,000 per year.

The CPC has refused to back the AJP in the House unless it first passes the AFP because Jayapal and other CPC leaders fear that the moderates would not back it.

The CPC wants to capitalise on the fact that Biden, Pelosi and many leaders from both sides desperately want to get the AJP passed. It is less controversial and has wide voter support among the voters of both parties because it deals with matters like roads, bridges. public transportation, electric vehicles and internet broadband.

They can't get it unless Jayapal and the CPC get behind it.

Although Biden's spokesperson said on Thursday when Pelosi had set the AJP vote, “we are working towards winning a vote tonight,” Pelosi had to back down and drop it.

At a closed-door meeting with his party members on Friday, Biden switched sides and said that the two plans would have to be taken up together. He later told reporters that although the AJP vote was off, “it doesn’t matter whether it’s in six minutes, six days or six weeks. We’re going to get it done.”

Moderate Democrats blamed Jayapal and the CPC for the failure to pass the AJP. Josh Gottheimer, a Democrat member of the House who worked on finding a compromise, blamed Jayapal and her supporter whom he described as “a small far-left faction” for blocking the “president’s historic bipartisan infrastructure bill.”

Mid-term elections are scheduled next year covering all members of the House of Representatives and some in the Senate making it imperative for the Democrats to have the programmes in place when they face the voters.

But the elections are also the reason the CPC wants the AFC passed now as the Democrats risk losing House majority if the historic pattern of mid-term election outcomes holds.

Since the Democrats do not have the 60-vote majority in the Senate that is required to pass such legislation independently, they manoeuvred to have the AJP and the AFP treated as amendments to the budget – called “reconciliation” measures– requiring only a simple majority. The two sides are deadlocked in the Senate with 50 votes each and Vice President Kamala Harris can cast the tie-breaker as the president of the chamber.

While all Republicans oppose the AFC in the Senate, two Democrats from states dominated by Republicans have also opposed the plan because of its size and scope and without their votes, it cannot pass. As the two sides stake their positions, Democrat Senator Joe Machin has offered to back a total package costing $1.5 trillion.

But Jayapal has rejected the Manchin proposal as too small and told CNN the compromise could be between $1.5 trillion and $3.5 trillion.

Biden is pressing the two sides to make a compromise.

The CPC describes itself as “standing up for progressive ideals” and Ro Khanna, another Indian American Congressman, is its deputy whip.

Jayapal had introduced a bill in 2019 demanding that India restore Kashmir's special constitutional status that the Indian government had rescinded. She has also made statements critical of Prime Minister Narendra Modi and India. External Affairs Minister S. Jaishankar refused to meet with a House Foreign Affairs Committee that year because Jayapal was to be included in the meeting even though she is not a member of the panel.

Jayapal, whose family is Malayalee, was born in Chennai and grew up in India, Indonesia and Singapore before going to the US to study when she was 16. She is the founder of OneAmerica, an immigration advocacy organisation. 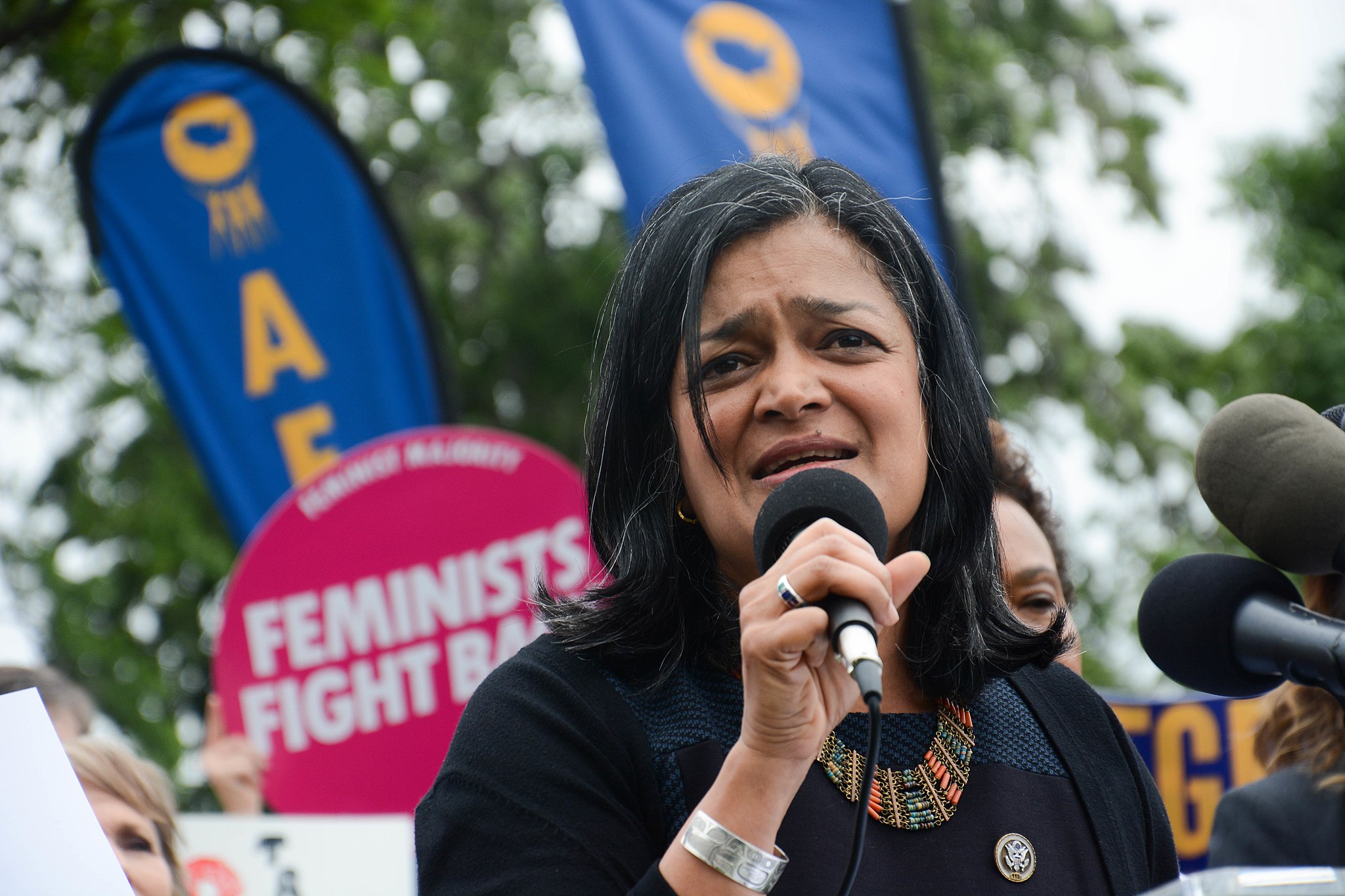 Jayapal spokesperson Chris Evans told Politico, “She has a unique story as an immigrant – but also coming at 16, and to be sitting at the White House delivering what would be a transformational investment in social programs, it will be a moment she will remember forever.”

Politico said she broke into tears at a meeting with Biden when demanding that those working on farms, essential workers and those who came illegally to the US as children should get a chance to become citizens.

Armed with an MBA, she worked in the private and public sectors before switching to global health and development for the international nonprofit organization, Program for Appropriate Technology in Health (PATH). After spending two years in India on a fellowship she published her first book in 2000, “Pilgrimage to India: A Woman Revisits Her Homeland.”

(The writer, a Nonresident Fellow, SPS, can be followed on Twitter @arulouis)