South Asians make up 25 per cent of the world’s population but they contribute 50 per cent to global cardiovascular deaths. Studies have shown that immigrants from India, Pakistan, Bangladesh, Sri Lanka and Nepal are experiencing a dramatic rise in heart disease in the United States.

As part of an ongoing awareness and education campaign about high-risk heart disease in South Asians, the American Association of Physicians of Indian Origin (AAPI) - the largest ethnic medical organization in the United States with over 80,000 members - presented two eminent speakers and experts, Dr. Enas Enas and Dr. Amit Kera, discussing ways to create awareness on heart disease among South Asians during a webinar on October 16. 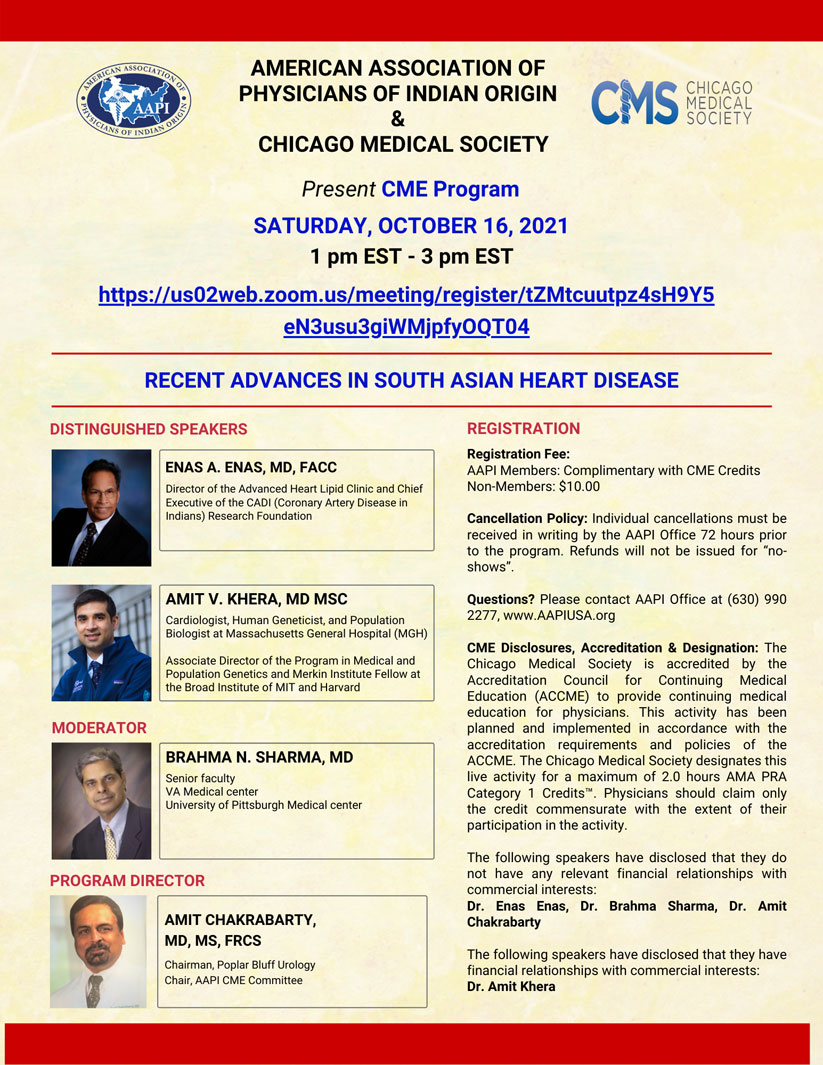 Dr. Anupama Gotimukula, President of AAPI, said, ” Today is World Restart a Heart Day. Today’s conference is being organized to educate and create awareness about the major health issue faced by South Asians and offer ways to mitigate Heart Disease.”

In his lengthy and detailed presentation with anecdotes from his personal experiences in studying and treating patients with cardio issues, Dr. Enas provided a broader perspective on the “History and Magnitude of Heart Disease Among South Asians.”

Dr. Enas referred to several research/studies around the world, showing high prevalence of CAD (coronary artery disease) among Indians. “Indians have a big problem with premature heart disease,” Dr. Enas said and pointed out that 185,000 people of South Asian origin die of heart disease per year as against 15,000 Whites die of the same health issue. While referring to Mitigating Risk Factors, Dr. Enas recommended Indians to follow the American Heart Association-developed "Life Simple 7" with additional requirement for exercise and maintaining sugar level below 140.

Dr. Enas Enas, a cardiologist from Chicago and also Director of CADI  (Coronary artery disease in Indians ) presented a historical perspective as to why South Asians and, especially, Indians have such high risk for heart disease, starting at very young age. Dr. Enas emphasized that traditional factors do not capture the entire risk and suggested that genetics, especially LPa, plays equally important role and advised all South Asians to get measurement of LP(a) at least once  in their life starting at young age.

Dr. Amit Kera, a new rising star in Preventive Cardiology, built on that argument and presented genomic data to fill the gap and also pointed out that usual risk scoring has been done on Caucasians and cannot be extrapolated to South Asians.  Pointing to international studies that point to prevalence of cardiovascular diseases high among South Asians, he said diabetes is diagnosed four times more among the Asians in comparison with Europeans.

Dr. Brahma Sharma, Senior Faculty at the University of Pittsburgh affiliated Medical Center, said, “While we are still trying to figure out different mechanisms for this enigma, that should not prevent but rather motivate to follow more aggressively life style modifications and pre-empt and prevent this silent epidemic that is taking a toll on young Indians and South Asians globally.” Dr. Sharma is the Chair of AAPI South Asian Heart Disease Committee and as the Chair AHA/ AAPI Liaison.

Dr. Gotimukula said, “Heart disease is the number one Global Public Health problem. South Asians are at a four-times greater risk of heart disease than their western counterparts and have a greater chance of having a heart attack before 50 years of age. Heart attacks strike South Asian men and women at younger ages, and as a result, both morbidity and mortality are higher among them compared to any other ethnic group. They tend to develop heart disease ten years earlier than other groups. Efforts to raise awareness of heart disease and promote “Healthy Heart” lifestyles is essential.”

(For more information on AAPI and its programs, please visit: www.aapiusa.org)

AAPI to be made a premium healthcare leader in the US