The front lawn of the Coahoma County courthouse in Clarksdale, Mississippi state will serve as the location and home of a large bronze bust of Mahatma Gandhi, the man who led India to its independence 75 years ago, and whose teachings have influenced many world leaders and intellectual thinkers, including Martin Luther King, Jr., Nelson Mandela, Albert Einstein, Congressman John Lewis, Steve Jobs, and several others.

The bronze bust is a gift to the city of Clarksdale, Mississippi, and Coahoma County from the Indian Council for Cultural Relations (ICCR) and the Consulate General of India, Atlanta, and was resented in a ceremony Friday by India's Consul General, Dr. Swati Kulkarni to city, county, and state officials. The bust joins many other Gandhi busts and statues across the US, including in Washington DC and New York City.  The ceremony took place the week of Gandhi’s birthday and during the celebratory 75th anniversary year of India’s founding as the world’s largest democracy.

“Gandhi-ji is an extraordinary inspirational force across the world. His most important legacy is his technique of nonviolent moral activism and his principles of courage, truth, and religious tolerance,” said Dr. Kulkarni. “His principles provided an impetus for Dr. Martin Luther King, Jr., who followed his operational techniques. Mahatma Gandhi led India’s epic freedom struggle against colonialism and Dr. Martin Luther King, Jr. led America’s epic struggle against racism. Both Mahatma Gandhi-ji and Dr. Martin Luther King will continue to inspire generations through their life and the values they stood for.” 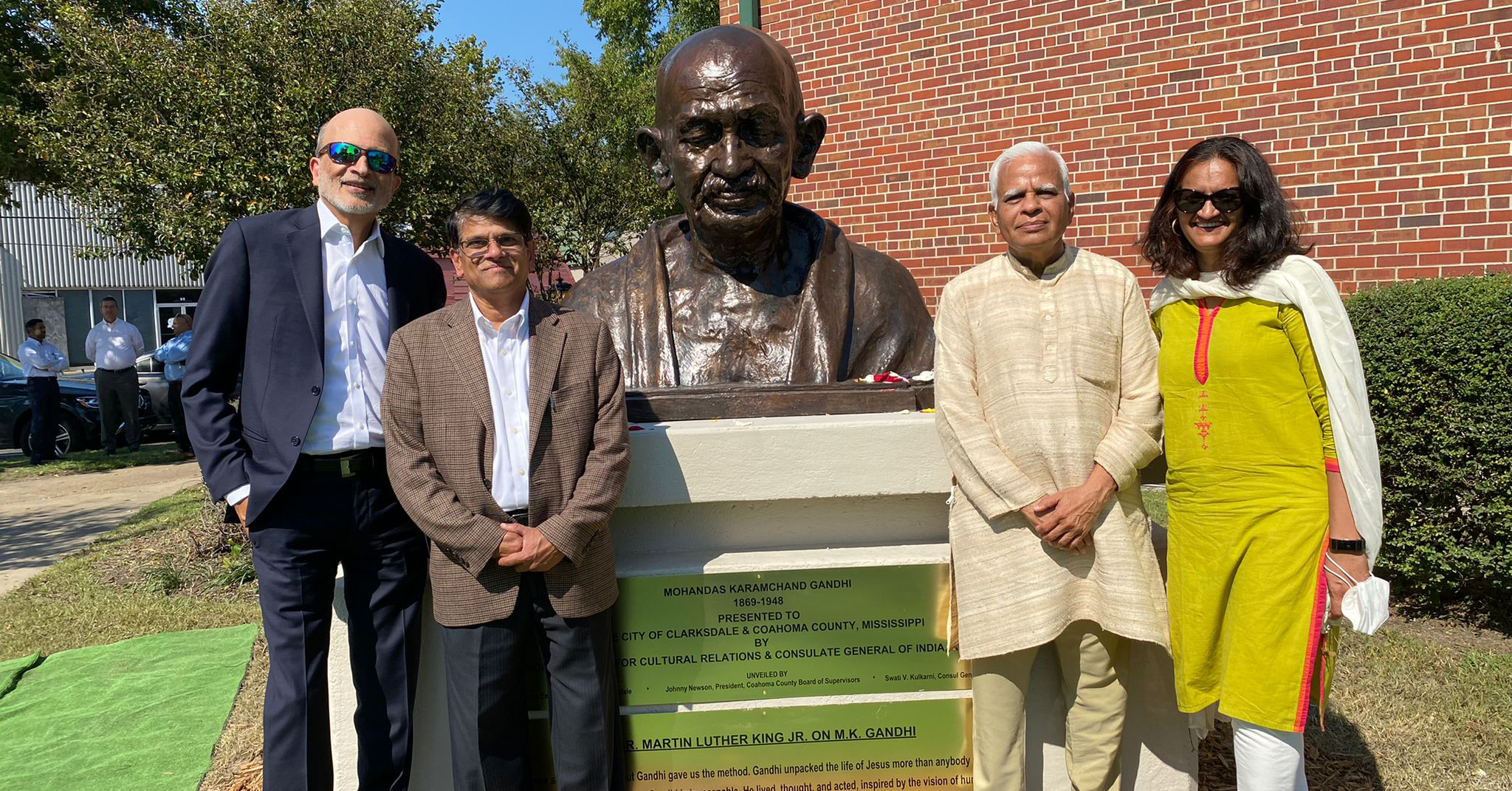 The bust, commissioned and supplied by the ICCR  under the aegis of India’s Ministry of External Affairs was designed by the famous Indian sculptor Ram Sutar. The event was sponsored by the Crossroads Economic Partnership, a collaboration of the Chamber of Commerce and the Economic Development Authority of Coahoma County; PeopleShores, a social enterprise; and Indiaspora, a nonprofit organization of global Indian diaspora leaders.

Clarksdale and Coahoma County are located in the heart of the Mississippi Delta region near the Mississippi River. The Indian American community has played a significant role in the progress of the area. Jon Levingston, executive director of the Crossroads Economic Partnership, said, “Having recruited PeopleShores to Clarksdale, which was founded by Indian American Murali Vullaganti, I have seen firsthand their commitment to training their employees not only with technical skills, but most importantly, essential life skills. Their care and thoughtfulness in providing employees new educational and job opportunities are helping to break the generational cycles of poverty that have gripped our region for decades. There is also a fully staffed medical clinic in the PeopleShores building to address without charge the healthcare needs of those citizens who have no health insurance. Their leadership in this endeavor and their embodiment of the legacy of Mahatma Gandhi makes this gift even more meaningful and resonant for us.”

“Mahatma Gandhi’s teachings and principles continue to be a guiding light now as much as ever. This is especially relevant today when we are grappling with uncertainty in the face of a global pandemic, as well as a new social awakening in the U.S.,” said MR Rangaswami, founder of Indiaspora. “We are delighted to be engaged in this community-wide effort. We hope the Indian diaspora can continue to serve as a force for good, as a bridge between countries, and as global ambassadors for Gandhi's message. Our hope is that his legacy is a reminder of what is possible.”

Clarksdale Mayor Chuck Espy, speaking about the gift said, “We are humbled by this most generous gift. Gandhi was among the most courageous and spiritual of men. He led his nation to freedom not with guns but with simplicity, determination, truth, and nonviolence. His efforts inspired the world, including the leaders of our own nation’s Civil Rights Movement, such as Dr. King and the late Congressman John Lewis.”

Coahoma County Board of Supervisors president, Johnny Newson observed, “Gandhi was a transformational leader. He embodied the virtues of tolerance and respect. He showed the world that change can be made without violence and changed the course of a nation forever. We welcome and are grateful for the opportunity to strengthen our bonds of friendship with the Indian American community as well as our brothers and sisters in India.” (SAM)