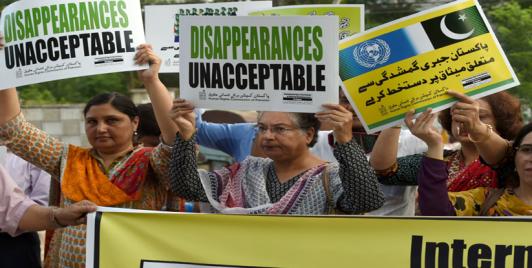 Amnesty International has called on Pakistan to end the practice of enforced disappearances and to disclose, “immediate and “unconditionally” the fate and/or whereabouts of forcibly disappeared people

Ticking bomb: Pakistan minister warns of threat within - of growing extremism; state in '…

Pakistan’s Parliament on Wednesday passed a bill to give Indian national Kulbhushan Jadhav, who is on death row, the right to appeal against his conviction, in accordance with the directive of the International Court of Justice

Karachi, Pakistan's largest city, is reporting cases of mysterious fever with dengue-like symptoms but when tested for the vector-borne disease the report is coming negative

Pakistan has been staring at a shortfall in cooking gas supply in the months to come, forcing the government to work on a plan, rationing the domestic usage in residential colonies in the country, media reports claimed

Elections in Pakistan have lately become controversial, amid frequent allegations by political parties of rigging and compromised process, putting the credibility of the elected government in question

Pakistan has revoked the ban on the Tehreek-e-Labbaik Pakistan (TLP), a hardliner Islamist group involved in a series of violent protests, citing “larger national interests”, days after the government reached “a secret agreement” with the former on 31 October

The Lahore High Court has acquitted six leaders of the banned Jamat-ud-Dawa (JuD), a charity front of the Lashkar-e-Taiba (LeT) founded by Mumbai attacks' mastermind Hafiz Saeed, in a terror-financing case

The Pakistan Democratic Movement (PDM), a multi-party opposition alliance, has announced its decision to launch protests across the country and a long march towards Islamabad against inflation and Prime Minister Imran Khan-led government's "anti-people" policies

The Pakistan government has reportedly reached an understanding with the banned militant group Tehreek-i-Taliban Pakistan (TTP), commonly known as the Pakistan Taliban, to announce a temporary ceasefire in a move that could pave the way for broader peace talks, ending the two-decade-long militancy in its northwestern region, reported Dawn

In what is the highest increase for a month, Pakistan’s exports in October registered a growth of 17 percent, touching $2.471 billion against $2.104 billion in the same month last year