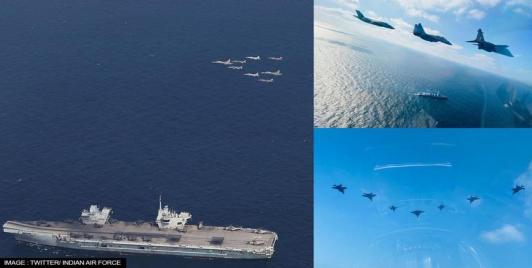 As India and the UK expand their defence and strategic ties as part of a larger "Roadmap" of bilateral cooperation, all three services from the Indian and UK Armed Forces are exercising simultaneously in exercise Konkan Shakti-21 conducted by both countries

Indian Prime Minister Narendra Modi on Wednesday inaugurated the Kushinagar International Airport in the district which is the final resting place of Lord Buddha. The inaugural flight, carrying a Sri Lankan delegation, headed by Sri Lankan Minister for Youth and Sports Namal Rajapaksa, including over 100 Buddhist monks, landed this morning

Migrant workers from other states line up to leave Kashmir

On a rainy morning in Srinagar, three children of Vikas Choudhary, a labourer from Bihar, are shivering in the cold as they wait for a taxi to leave Srinagar, Kashmir - upending a life of 18 years

India to conclude FTA with Israel next year; agree on mutual recognition of vaccine certificates

India and Israel will resume negotiations on the Free Trade Agreement (FTA) from next month, said Indian Foreign Minister S Jaishankar on Monday during his first visit after the new government took over in June

The ferocity of the fighting between Indian security forces and terrorists holed up in the jungles of Jammu and Kashmir's Poonch district for at least eight days suggests the cross-border intruders were trained by Pakistani commandos, sources in the Indian Army and Jammu and Kashmir Police have told NDTV

The goal of the Atmanirbhar Bharat, or a Self-reliant India, campaign is to make India one of the biggest military powers in the world by developing a modern military industry in the country, Prime Minister Narendra Modi Friday as he inaugurated seven new Defence Public Sector Units (DPSUs)

Developed countries must take measures and legislate for net-zero emissions by the current decade itself, India demanded on Friday

Stressing on the need for enhanced regional connectivity, Indian External Affairs Minister S Jaishankar on Wednesday proposed that the strategic Chabahar Port in Iran be included in the North-South Transport Corridor that has the potential to bridge connectivity barriers, as he agreed on a roadmap for future course of cooperation and exchanges during bilateral talks with his Armenian counterpart Ararat Mirzoyan

India is doing well in terms of vaccinating its own people and this is certainly helpful in its economy, a top International Monetary Fund (IMF) official said on Tuesday as the global financial institution in its latest outlook projected 9.5 per cent growth rate for India in 2021

A "selective" approach to human rights dents the country's image, Prime Minister Narendra Modi said Tuesday, as he criticised "some" who viewed human rights "with an eye on political gains and loss" and were therefore harming the practice of such rights and democracy

India has embarked on an exciting journey: set to reach 40 percent energy from non-fossil sources by 2022: Minister

India is set to achieve 450 GW renewable energy installed capacity by 2030, the Ministry of New and Renewable Energy said on Monday

Prime Minister Narendra Modi and his British counterpart Boris Johnson on Monday held a telephone conversation during which they welcomed the UK’s recognition of Indian vaccine certification and agreed on the need for a coordinated international approach to engage with the Taliban, The Indian Express said

An Indian army officer and four soldiers were killed in action during a firefight between security forces and terrorists in Jammu and Kashmir's Poonch district on Monday, officials said

India's COVID-19 vaccination coverage has crossed 950 milion with the administration of 46,57,679 doses in the last 25 hours, informed India's Ministry of Health and Family welfare on Monday

In a crackdown post the killing of seven civilians,  including those from the Kashmiri Pandit, Sikh and Muslim communities, in six days, Indian security forces have detained over 700 people in Jammu and Kashmir. Several of those detained are believed to have links to the banned Jamaat-e-Islami, police said

A recent analysis by the Mahamana Centre of Excellence in Climate Change Research (MCECCR) at Banaras Hindu University (BHU), in collaboration with the Department of Science and Technology and the Ministry of Earth Sciences, has found a spatial shift of heatwaves in India, with this weather event now occurring in new regions in the country, The Indian Express said.